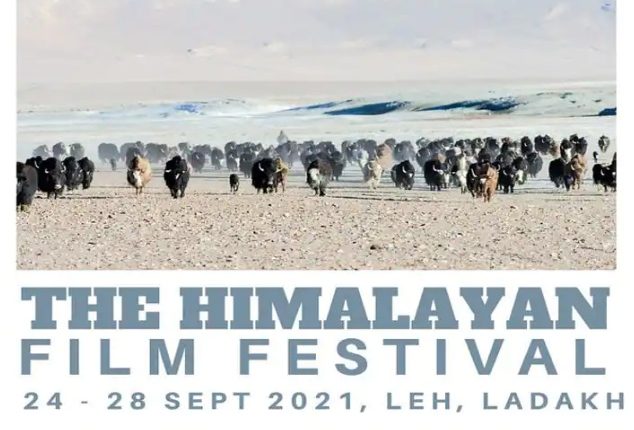 The festival spanning five days is being held at Leh, Ladakh from 24th to 28th September 2021.

The inaugural of the festival will witness the presence of makers and cast of the super hit movie Shershah, including Director Vishnuvardhan and the lead actor Shri Siddharth Malhotra.

Shershah is also the opening feature film of the festival.

A package of contemporary National awards and Indian panorama selected films will be showcased at the event. The screenings will be at the Sindhu Sankriti Auditorium, Leh having digital projection facilities.

A diverse set of workshops and masterclasses will be organized wherein filmmakers, critics, technicians from the Himalayan region shall be invited to impart knowledge and skill to local film enthusiasts. This will serve as a necessary stimulus to ignite a creative leaning towards filmmaking.

Short Films and Short Documentaries have been invited in the Competition Section. The Awards are for Best Film to be given to Director and Producer, Best Cinematography, Best Editor & Best Story.

Along with the above components, the film festival will also cater to various palette of the audience with Food festival: The cuisine of the different region of Ladakh is unique owing to its distinct geography and weather conditions. The festival venue shall accommodate the food festival during the period of five days.

Cultural Shows: Cultural shows shall be held in collaboration with the Department of culture to showcase the rich cultural varsity of Ladakh.

Music Fest: Young Musicians of Ladakh have been invited to do shows at the venue

The Himalayan region of India attracts filmmakers from all around the globe due to its unique scenic endowment. The unique geography of the region is widely documented along with its indigenous people, traditional skills, and occupations. Film festival in this context presents an opportunity for the local filmmakers to narrate their stories to a wider audience.

In the last two decades, the Independent film industry in the region has taken shape with filmmakers producing local-language films. The same period has also seen rapid electrification in the region which is the prerequisite for the development of the audio-visual sector.

With these developments, a popular film produced in India reaches Ladakh but stories from Ladakh still remain untold, especially from the perspective of local filmmakers. Film workshops, masterclasses, and in-conversation sessions in this context will impart necessary skills and networking opportunities to budding as well as established filmmakers.

The Himalayan Film festival also envisions institutionalizing a Himalayan film fraternity which will have productive repercussions for filmmaking in the Himalayan parts of India. Popular films from the Himalayan region and other filmmaking states of India will be showcased during the 5-day festival.