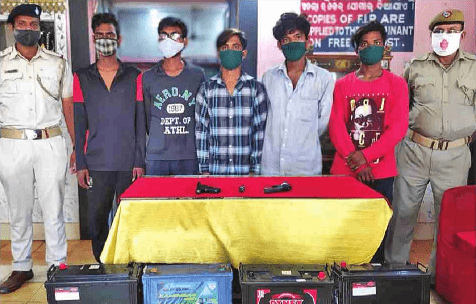 Cuttack: Chauliaganj police claimed to have busted a highway looters’ gang with the arrest of five of its members in Cuttack.

Acting on a tip-off, police conducted a raid and nabbed the five accused while they were planning for a robbery. The cops also seized a country-made pistol, iron road, weapons, eight truck batteries, and three bikes from their possession.

During interrogation, the accused confessed their crime and revealed that they used to target the interstate goods trucks and the motorists on the National highways.

The accused were involved in various loot cases on National highways and have several pending cases in different police stations, sources informed.

A case was registered regarding the same and the accused were forwarded to the court, sources said.

‘Low Pressure’ To Trigger Heavy Rain In Odisha From June 10