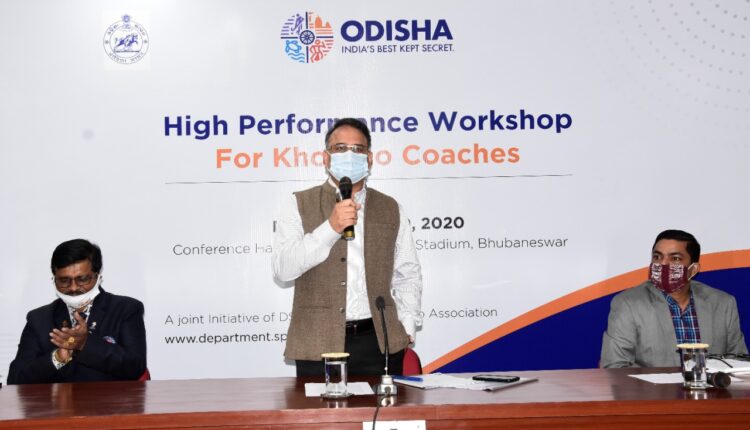 Bhubaneswar: A two-day high-performance and sports science workshop for Kho Kho coaches got underway here today at the Kalinga Stadium Sports Complex. The high performance workshop is being jointly conducted by Sports and Youth Services Department, (Government of Odisha) and Odisha Kho Kho Association for 33 kho kho coaches from 16 districts in the state who aim to imbibe modern scientific training in the sport at the grass roots level.

Odisha has shown impressive forms at national-level tournaments in recent years in kho kho, which is being considered for inclusion in the next Asian Games. The state won back-to-back bronze medal in the Khelo India Youth Games in the girls’ U21 category in the last couple of years. At the National Sub-Junior Championship for girls which was held last year in Ranchi, Odisha toppled reigning champion Maharashtra, while the Odisha boys’ team bagged silver medal in the National Sub-Junior Championship as the top honours went to Maharashtra.

On the occasion of the launch of the high-performance workshop,  the chief guest at the event, Shri Vishal Kumar Dev, Commissioner-cum-Secretary, Sports & Youth Services Department (DSYS), Odisha, lauded the organisers for taking the initiative to promote the indigenous sport which is catching the imagination of the fans at the Khelo India Youth Games and other multi-event games and said, “I congratulate all the kho kho coaches participating in the high-performance workshop. Kho kho is one of the most accessible sports in the country and played among large populations at every skill level. At the competitive level, it is an intense and physically demanding sport that requires incredible power, speed and agility for long periods of time. I am confident that this workshop will help our coaches inculcate high-performance training at the grassroot level and produce national and international kho kho champions from Odisha.”

President of Odisha Kho Kho Association, Shri Narayan Patra, said, “We are very thrilled that kho kho in Odisha is getting a huge boost from the Sports and Youth Services Department. We are confident that this will lead to a lot more success for kho kho teams from the state.”

Lt. Colonel A Rajesh (Retd.), who is a certified Exercise Physiologist from the American College of Sport Medicine and Sr. Consultant for High-Performance, is conducting the workshop. He said, “The youth of Odisha, by virtue of their genetics, possess abilities to succeed in kho kho. With the right sport-science and nutrition support, it is possible to produce international athletes within three to four years.”

Youth Run Over By Train In Jharsuguda