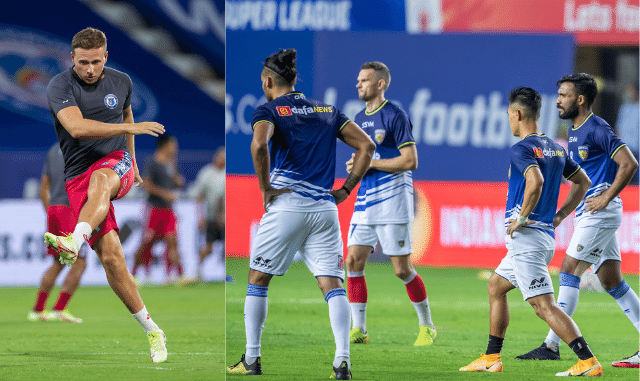 Goa: There will be no shortage of confidence when Jamshedpur FC take on Chennaiyin FC with their eyes firmly locked on the top of the table and keeping their neighbours on their toes, in the Hero Indian Super League at the Tilak Maidan Stadium on Sunday.

Jamshedpur are third in the points table having 28 points from 15 games, one behind table-toppers Hyderabad FC and second-placed ATK Mohun Bagan, both of whom play on Saturday. Hyderabad have played a game more while ATKMB are level on the number of games played with Jamshedpur.

The Owen Coyle-coached side have won their last two fixtures and will be gunning for a hattrick of wins against a ragged Chennaiyin side who have not won a match in their last five engagements. Chennaiyin played under interim boss Sabir Pasha for the first time in their last game, eking out a 2-2 draw against Odisha FC, meaning their semifinal hopes are all but over.

“The boys showed character in the last game. It is always difficult after conceding five gpoals and then to comeback after going down by two goals. They have to carry the momentum forward. it will be a tough match and in three days. But the boys will give a real fight,” said Pasha ahead of the game.

“Jamshedpur are a very good side, both in attack and defence. We need to improve our game against them. They have some dangerous players who can hurt us,” he added when asked about the opponents on the morrow.

Jamshedpur are on the cusp of making the semifinals for the first time in the Hero ISL history. The Red Miners are well placed to make the cut after winning five of their last six matches and would want to further assert their dominance with a win against Chennaiyin.

Greg Stewart has found his goalscoring boots, scoring a brace in a row in the last two games. Daniel Chima Chukwu also provided an assist to add to his three goals in three games since joining them and together the duo have shown fine form. Ritwik Das has also flourished under Coyle and with Peter Hartley and Eli Sabia in defence, the team is looking like one of the hot contenders this season. The last time two sides met, Chennaiyin won by 1-0.

Practice These Yoga Asanas For A Healthy Uterus