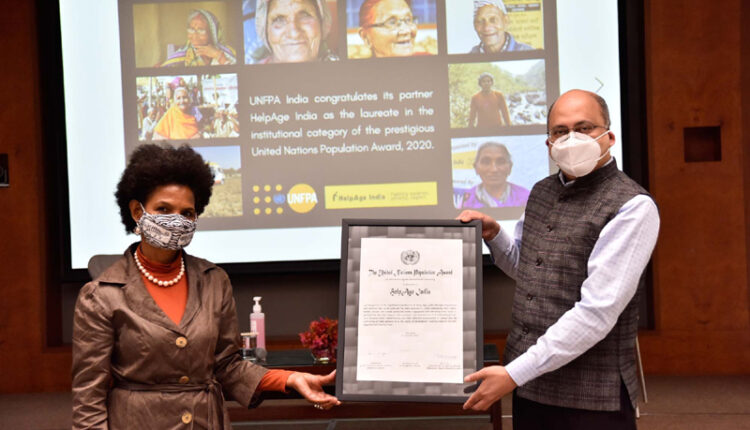 Bhubaneswar: HelpAge India, an NGO that works for the care of elderly disadvantaged persons and senior citizens, has become the first Indian institution to have won the prestigious ‘2020 UN Population Award’ in its ‘institutional category’.

The award, which included a Diploma Certificate, a gold medal and a monetary prize was presented in a felicitation ceremony held by the United Nations Population Fund, India (UNFPA) on Thursday.

The United Nations every year honours an individual and/or institution for outstanding contributions to population and reproductive health questions.

HelpAge India has been working for ‘the cause and care of disadvantaged older persons to improve their quality of life’ for over four decades. It received this recognition for its impactful work with and for disadvantaged elderly.

This honour comes in recognition of HelpAge India’s outstanding contribution to population issues and awareness, in its efforts in the realisation of older person’s rights in India since 1978.

Addressing ageing issues and concerns in India at the award ceremony, representative of UNFPA India, Argentina Matavel Piccin, said, “This is a moment of immense pride and joy for all of us working here in India, especially for those of us who are working in the field of ageing and care of the elderly. To place the elderly and their needs squarely on the policy and budget allocations agenda of the country is a major priority. Your (HelpAge India’s) tireless and consistent efforts have finally paid off and caught the world’s attention, whether it is in operating one of the largest mobile healthcare networks, providing employment to the elderly or promoting inter-generational exchanges, linking young people with the aged. We must change the narrative and refocus on the elderly as a resource, a repository of vast knowledge. UNFPA is very proud of our partnership with HelpAge India”.

Chairperson, HelpAge India, Kiran Karnik, said, “It is an honour, on behalf of HelpAge India, to receive the UN Population Award 2020, a first for an Indian non-profit in this category. We are particularly happy to see ageing concerns being brought to centre-stage. In India, an overwhelming proportion of the elders are financially dependent on their families, and live with them. In many cases, they are perceived as a burden, and this sometimes results in ill-treatment and even violence. Elders face many issues – from financial, to physical, to psychological. Sickness and chronic afflictions – obviously common amongst elders – can mean large and unforeseen expenditures, something that most families cannot afford. There are also a large number of elders who are destitute, sometimes with no one to look after them. The many issues facing elders have been greatly amplified and expanded over the last one year as we seek to tackle the Covid 19 pandemic. Elders are even more vulnerable and need to take special care. UNFPA is among our most important and valued partners who have helped to take work forward in the whole space of elders”.

The award was last conferred on an Indian 28 years ago, when it was awarded to JRD Tata as an individual laureate in 1992.