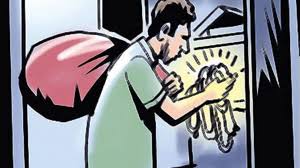 Keonjhar: A heist at a jewellery shop named Pramila Jewellery at Patana Market in Keonjhar district that occurred last night has been recorded on camera.

According to reports, the looters barged into the shop after breaking the asbestos roof of the shop and decamped with gold and silver ornaments.

However, the entire act was captured in the CCTV cameras installed at the shop.

The police have seized the CCTV footage and initiated a probe into the matter.