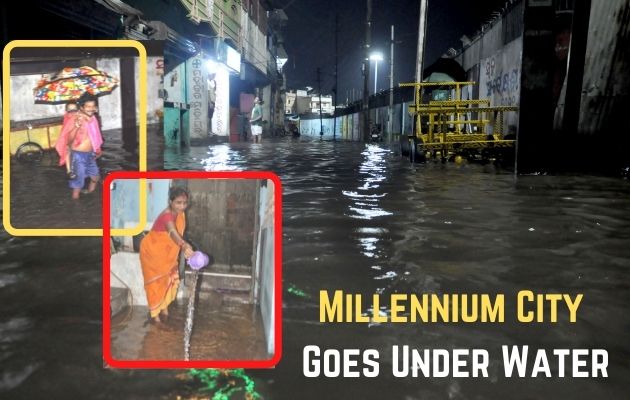 The streets, lanes and by-lanes across the city were submerged in rainwater and people were water-locked in their houses as rainwater along with drain water gushed into their houses today.

Speaking to Pragativadi, Sangeeta Dash, a local of Makarabag Sahi said, “The heavy downpour created numerous problems, especially those engaged in the emergency services including supply of milk, grocery and other items.”

“At around 2 PM, we found that water has reached up to our bedrooms as drain water that gushed into our house along with rainwater,” she said.

“Normal life was thrown out of gear in the entire city. People were not able to come out of their houses as streets across the city were inundated with knee-deep water,” said, Pramod Kumar Mohanty, a resident of Tinikonia Bagicha.

Reportedly, such kind of situation has exposed the worst monsoon preparedness of Cuttack Municipal Corporation (CMC). While flooding and the water-logging issue have become every year’s event in the city, the civic body authorities are yet to resolve it.

A couple of days ago, a similar incident occurred in Odisha capital as heavy rain inundated several parts of Bhubaneswar causing untold hardships to the citizens.