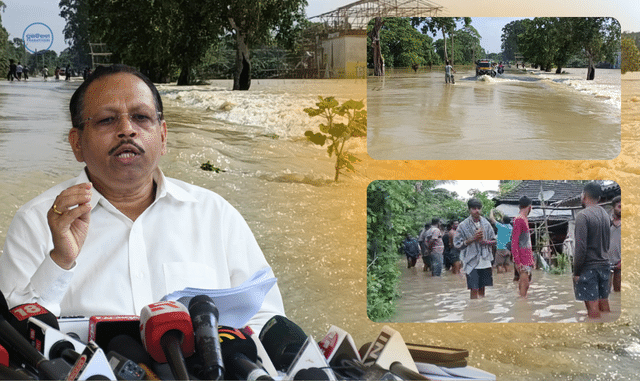 Bhubaneswar: After severe floods in western and coastal Odisha, now there is an imminent threat of heavy floods in North Odisha. Special Relief Commissioner (SRC) Pradeep Jena said in a press conference on Sunday that there is a possibility of heavy floods in the Subarnarekha river basin.

The SRC said that this flood will be more severe than the flood in Subarnarekha in 2008. Therefore, the state government’s MSME Minister Pratap Deb has been sent to the area to work with all the public representatives to deal with the flood situation.

Jena said a high-level flood situation may arise as about 6 lakh cusecs of water is being released through the Galudih barrage of Jharkhand. The Subarnarekha is now flowing 4 meters above the danger mark at Jamshola Ghat. Baliapal, Bhograi, Jaleswar and Basta blocks of the Balasore district will be the most affected and the intensity of the flood will be more severe in these areas. The flooding will continue till tomorrow evening.

The Odisha SRC said that 40 teams of NDRF, ODRAF and Fire Service have been deployed in Balasore and Mayurbhanj districts in view of heavy floods.

He further said, till now, Budhabalanga has not crossed the danger level and the water level has started receding at some places in the river system. Therefore, it is expected that there will be no flood situation in Bubhabalang.

SRC PK Jena informed that the Baitarani river is flowing 1 metre above the danger mark near Akhuapada. And after some time the water will start receding there. As the embankment breach in the Kani river could not be repaired, flood water started entering from the breach again. While Jajpur and Bhadrak have been put on alert for Baitarani, the level of Brahmani is being constantly monitored.