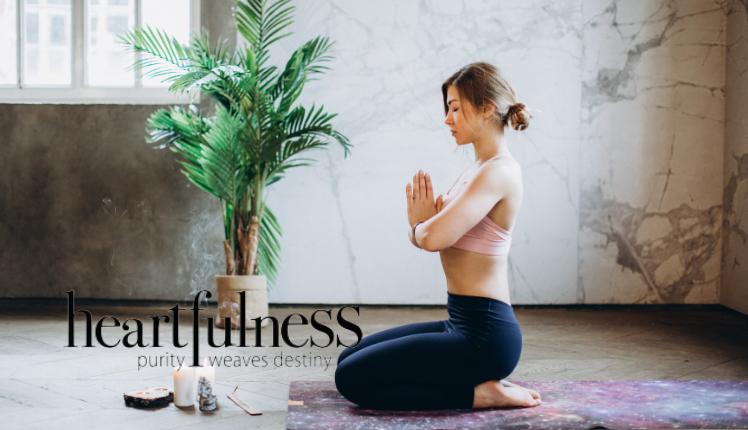 Heartfulness Launches ‘The Authentic Yoga’ Book, Brings Yoga Closer To One and All

Hyderabad/ Bhubaneswar: Heartfulness launched The Authentic Yoga originally written by Shri P. Y. Deshpande with additional content by Heartfulness Guide – Daaji, that includes the Foreword and a new chapter presenting the yogic practices in the light of Heartfulness for everyone to benefit from Yoga directly. The book gives a deep insight into the true state of Yoga in finding unity within body, heart, and soul in totality that can rightly translate us into being ‘human’.

The book is highly philosophical although written in a simple language. It is also quite a departure for Shri Deshpande to write it in English because he was originally a Marathi novelist. After meeting J. Krishnamurthy in 1961, he started to get involved in spirituality and wrote a series of books such as one on Bhagavat Gita and this one on Patanjali’s Yoga Sutras in English. And the latter was one of the books that set him up on the international stage as a great writer and as a highly regarding philosopher. Daaji not only wanted to reprint it because it was out of print but also to bring Deshpande’s school of Yoga to modern consciousness. Daaji’s chapter in the book talks about how to take what Deshpande ji said and translate it practically in modern-day life. It is also beautifully laid out and easy to read unlike what it was in the ‘60s.

Daaji says, “The benefits of yoga have been preached time and again. But there is much beyond physical and mental wellness that people need to understand that yoga imparts. There are emotional and spiritual aspects too that yoga elevates one along with character building and very few are aware of this aspect of yoga. To be one within oneself and with the universe is paramount for overall well-being and this is what I have tried to bring into light through this book. The idea was to bring Deshpande’s school of Yoga to modern consciousness. The one chapter that I wrote at the end of the book not only talks about how to take what Deshpande recommended as the proper method of Yoga, but also help people translate it practically in modern-day life. What I have also worked at through this chapter is removing the obstacles and the impediments that people face in achieving the state of Yoga.”

While many other books on yoga revolve around the aspects of asanas and pranayama as are the most commonly practised, Yoga begins with Niyama and Yama – which is character development and how to lead one’s lifestyle. This is followed by asanas and pranayama which are about physical wellbeing and energetic body, then the contemporary practice of yoga leading to Samadhi. Deshpande takes all of these aspects like Patanjali did, but he does it in a very different way than the yoga gurus and traditions from earlier times. An incredibly creative novelist that Deshpande was, meeting with Krishnamurthi influenced gave him to take a novel approach by experiencing Yoga himself from direct perception to Yogic perception. This is what makes the book very deep and a great source to understand what yoga truly is.

Deshpande also understands what stops us from attaining the state of Yoga. Yoga means unity or oneness within. He describes this beautifully as he guides us through the sutras in what stops us viz., our desires, likes, and dislikes – in attaining the Yogic state. He is able to describe as a physicist would – the physical, the energetic, the absolute state of existence that exists in matter, the universe, and human beings and he is able to describe how we can relate to the impediments, the emotions, and complexities in our systems. It is also something that Babuji did in a similar period in the 20th century, but not many yogis understand this and he has done this just superbly.

While Patanjali spoke about what creates mental disharmony in sutra format in short sentences with an essence, Deshpande ji expands the complexities and entanglements in our system. What he doesn’t do and which Daaji does in the last chapter of the book is recommending the practices to remove them from the system.

Practising the form of yoga as suggested by Deshpande ji and Daaji is very simple. A platform in Heartfulness known as Yoga for Unity has online videos from experts from all over the world so people can do yoga at home. This is not just for people who are adaptive and flexible, but also the many forms of yoga offered on the platform suit everyone from beginners’ level or those who are not fit or agile, and then there are breathing exercises and meditating practices. The platform Includes Heartfulness Academy and others such as Iyengar Yoga, Krishnamacharya Yoga, Shivananda Yoga, Bihar School of Yoga, etc. giving practices to do what Deshpande ji is talking about in The Authentic Yoga to create holistic well-being.

To sum it up, The Authentic Yoga is gold and a treasure of well-being. It is just not well-known around the world. But by accessing Yoga’s essence through the book, people get to understand this amazing philosophy and psychology of living.

Simple And Effective Hack To Chop Onions Without Tears