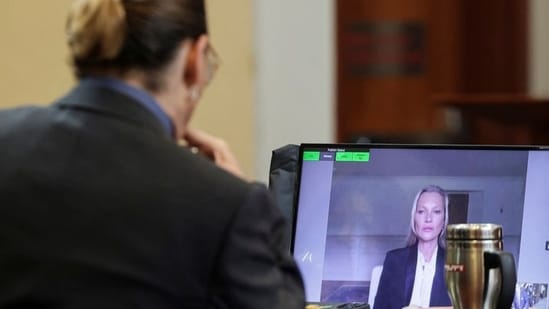 “He never threw me down any stairs”: Johnny Depp’s ex Kate Moss testifies against Amber Heard

Virginia: British model Kate Moss, who had dated Johnny Depp, briefly took the witness stand in the defamation battle between Johnny and Amber Heard on Wednesday. Kate had been brought up by Amber earlier in the trial when she claimed Johnny had pushed the model down a staircase when they dated in the 90s. However, in her testimony on Wednesday, Kate denied any such incident ever taking place.

The supermodel appeared via videolink on day 22 of the 58-year-old’s defamation trial against Amber Heard – which is being held at the Fairfax County Courthouse.

During the brief testimony, she was questioned by her ex’s lawyer, Ben Chew, about their four-year relationship.

Discussing rumours the Pirates of the Caribbean actor pushed her down the stairs during a holiday in Jamaica, she clarified that this was not true.

‘We were leaving the room and Johnny left the room before I did, and there had been a rainstorm,’ she told the court from Gloucestershire.

‘As I left the room, I slid down the stairs and I hurt my back.

‘I screamed because I didn’t know what had happened to me and I was in pain.

‘He came running back to help me, and carried me to my room, and got me medical attention.’

Chew asked again whether Depp had ever ‘pushed her down the stairs’ throughout the course of their relationship.

Moss added: ‘No, he never pushed me, kicked me or pushed me down any stairs.’

The former couple met in 1994 while in New York and embarked on a lengthy relationship before going their separate ways in 1998.

The fashion icon has never alleged that she was abused by her ex during their lengthy romance, but has said that she cried for ‘years’ after their split.

Depp is currently suing ex-wife Heard and seeking $50million in damages over a 2018 op-ed she wrote in the Washington Post, in which she discussed her experiences of domestic abuse.

While he was not named in the article, his team has argued that it implies he was sexually and physically abusive during their romance – something he has denied.