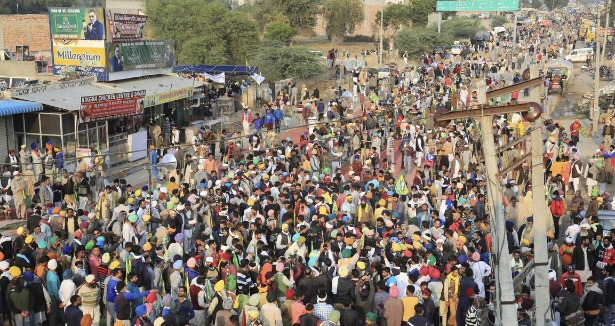 Chandigarh: Police officials from Haryana used water cannons and tear gas to disperse farmers from Punjab who allegedly tried to jump police barricades to enter Haryana as part of a march against new farm laws.

The Rajya Sabha passed three bills in September that loosen rules around sale, pricing and storage of farm produce.

While the government said the three laws will do away with middlemen, enabling farmers to sell their produce in the commercial markets, protestors fear that this could lead to the government not buying produce at guaranteed prices, thereby disrupting their timely payments.

Forces from at least two police stations, besides three Central Reserve Police Force battalions, have been deployed at the Delhi-Faridabad border.

Barricading has been done at four to five places on the Delhi-Faridabad border and drone cameras are also being used for security surveillance.

The three ordinances – Farmers Produce Trade and Commerce (Promotion & Facilitation) Ordinance 2020, The Farmers (Empowerment & Protection) Assurance and Farm Service Ordinance 2020 and The Essential Commodities (Amendment) Ordinance 2020 – were passed in September. They were signed into laws by President Ram Nath Kovind on September 27.