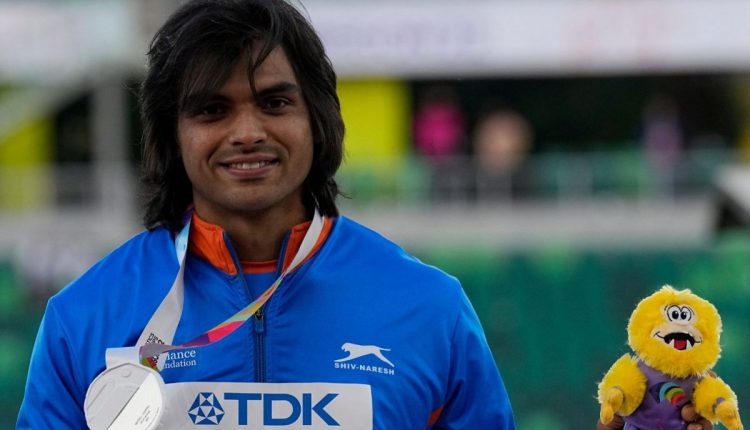 ‘Happy To Win Silver, Will Try to Change the Colour of Medal Next Time’: Neeraj Chopra

Oregon: Tokyo Olympics javelin throw champion Neeraj Chopra on Sunday (IST) ended India’s 19-year-long wait for a medal at the World Athletics Championships after he clinched the silver medal at the 2022 meet with historic throw of 88.13m. This was India’s second medal at the World Championships and the first podium finish since Anju Bobby George won a bronze medal in long jump at Paris in 2003. Neeraj Chopra after winning Silver Medal said that wind was not in favour, but feeling great after the victory.

“I’m feeling really great today to have won a silver medal for the country. Next year again, we have the World Championships, and the aim will be to do better there. A big thanks to SAI, the federation, and the government who have supported us and given us a foreign coach, and sent us abroad for training. I hope in every sport, we keep getting support and we make more progress,” Chopra said.

Chopra further spoke about the weather conditions at the venue that were ‘not good’ as the ‘wind speed was too high’. He also praised the performance of the defending champion Anderson Peters who took away the gold.

“While conditions were not good and the wind speed was too high, I was confident I would perform well. I am satisfied with the result; I am happy I was able to win a medal for my country. It might have looked easy, but Anderson must have put in a huge effort to cross 90 metres. He is world lead this year, throwing very good throws, several above 90 meters. I am happy he has worked so hard. This is good for me too, I have good competition”, he said.

“I didn’t feel pressured by the fact that I am an Olympic champion. I believed in myself even after the third throw. I made a comeback and won silver, it felt good. I will try to change the colour of the medal next time”, he added.