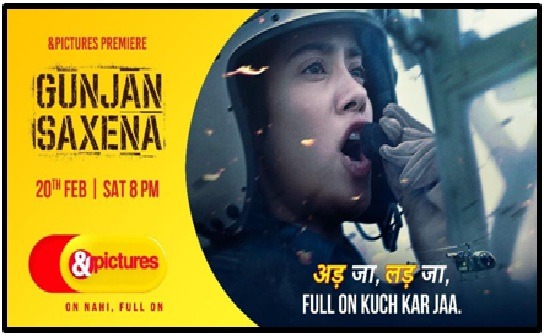 Gunjan Saxena: The Kargil Girl set for television premiere on &pictures on Feb 20

The plot begins with an ambitious Gunjan Saxena, who dreams of becoming a pilot. The story captures her passion and her pursuit of this dream. Even when Gunjan faces reservations and restrictions from the world, she keeps fighting and winning. She eventually serves in the Kargil War and goes on to become the country’s pride. Pankaj Tripathi, as the optimistic and encouraging father, gives a remarkable performance which fills our hearts with warmth. His character has a natural and light-hearted tone that complements the undying spirit of Janhvi Kapoor’s portrayal. It’s all about how a girl dreams big and then beats all odds to finally achieve it.

Janhvi Kapoor, excited about the premiere, said, “I am constantly inspired by Gunjan Ma’am. This is a girl that chased her dreams and made them come true. The movie stays with me now and forever, as a motivational point that pushes me further every time I face a challenge. In many ways, the movie helped me grow as a person. It gave me the mantra, that being on nahi, full on, helps in facing the difficult situations with ease. The movie is packed with heart-warming moments. It’s a definite weekend treat. Don’t miss the &pictures premier of Gunjan Saxena: The Kargil Girl on 20th February at 8 pm.”

Pankaj Tripathi adds on, “Some stories are such that you instantly become a part of it and are taken aback by their simplicity and strength. Gunjan Saxena: The Kargil Girl is one such film. It’s been an absolute pleasure playing Janhvi’s father and the one thing I’m hoping to see is father-daughter relationships like this bloom in reality. I truly hope the viewers of &pictures find the film inspiring as well as entertaining”

Kursi ki paiti bandh lo, take off ka time aa gaya hai. Tune into a full-on tale of inspiration and entertainment with the premiere of Gunjan Saxena on 20th February, 8 pm only on &pictures.