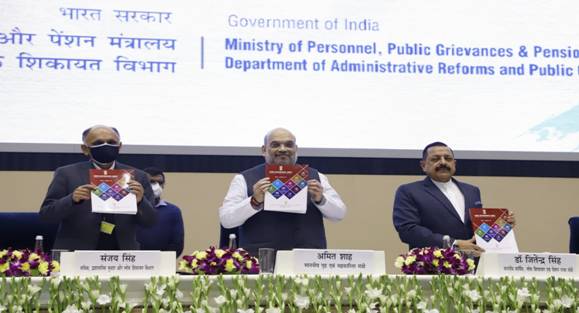 Addressing a function organised to mark the Good Governance Day, Mr Amit Shah said people have long been waiting for good governance which was delivered by the Narendra Modi government in the last seven years. He said people’s faith in democracy has enhanced since 2014, as they started getting benefits of development undertaken by the Modi government.

Giving example of good governance, Mr Shah said that there has not been a single corruption charge against the Modi government in last seven years as it is a clean and transparent administration.
On this occasion, Dr. Jitendra Singh, Minister of State for Personnel, PG and Pensions said that Citizen Centric Administration is at the Heart of Modi government’s Governance Model. He said, Good Governance Index would help assess the status of governance in States and Union Territories.

GGI 2021 says that Uttar Pradesh has shown an incremental growth of 8.9 % over GGI 2019 performance. Among the sectors, UP has secured top position in Commerce & Industry sector and has also shown increase in Social Welfare & Development and Judiciary & Public Safety. Uttar Pradesh has also performed in citizen centric governance including public grievance redressal.

GGI 2021 says that in the North-East and Hill States category, Mizoram and Jammu and Kashmir have registered an overall increase of 10.4% and 3.7% respectively over GGI 2019. Mizoram has performed strongly in commerce and industry, human resource development, public health and economic governance. Jammu & Kashmir has performed strongly in Commerce & Industry sector and has improved its scores in Agriculture & Allied Sector, Public Infrastructure and Utilities and Judiciary and Public Safety sectors.

The GGI 2021 says that 20 States have improved their composite GGI scores over the GGI 2019 index scores. The sector-wise scores attained by the States and UT’s indicates that strong performance in one or the other sector. Analysis of scoring also suggests that there is a very marginal difference among the States in their composite governance scores. This indicates that overall governance in the States of India is moving in the positive direction.

Two Killed After Being Hit By Speeding Truck In Deogarh