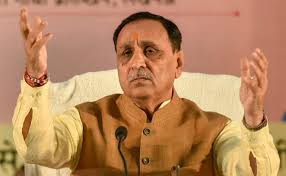 Ahmedabad: The Gujarat government will soon bring  strict laws against ‘love jihad’ in the state. This was announced by Chief Minister Vijay Rupani at a poll rally.

The Chief Minister’s announcement comes months after Uttar Pradesh and Madhya Pradesh governments brought religious freedom laws to stop conversion through marriage or by any other fraudulent means.

Rupani said the BJP government in Gujarat has framed strict laws against ‘gunda’ (anti-social) elements and land grabbers to protect the interests of the common man.

Worth mentioning that the UP government had introduced an ordinance (Uttar Pradesh Prohibition of Unlawful Conversion of Religion Ordinance, 2020) in November against forcible or fraudulent religious conversions that provided for imprisonment up to 10 years and a maximum fine of Rs 50,000 under different categories.

The provisions of the law will make marriage “null and void” if the conversion of a woman is solely for that purpose.

Car Falls Off Bridge In Balasore; One Killed, 3 Injured