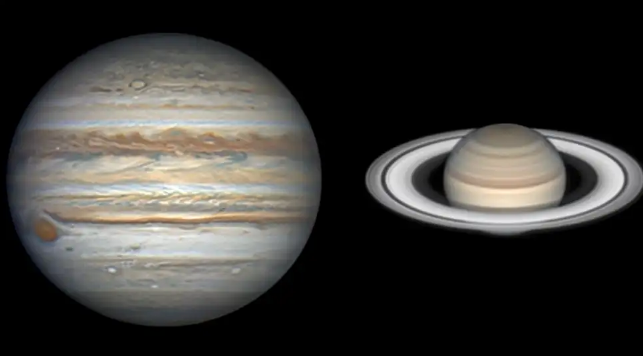 New York: Jupiter and Saturn will merge in the night sky Monday, appearing closer to one another than they have since Galileo’s time in the 17th century.

Jupiter and Saturn will align in the night sky on Dec. 21 in an event astronomers call the “great conjunction” — also referred to as the “Christmas Star” — marking the planets’ closest encounter in nearly 400 years.

When Saturn and Jupiter converge on Dec. 21, the two planets may appear as a bright point of light that will be easily visible in the night sky. The two planets have slowly been moving closer to each other over the past few weeks.

A conjunction occurs when planets appear incredibly close to one another in the sky because they line up with Earth in their respective orbits.

While Saturn and Jupiter’s orbits bring the planets into alignment once every 20 years or so, this year marks the first time since 1623 that the two gas giants have passed this close to one another.

This year’s great conjunction also marks the first time in nearly 800 years since the planets aligned at night and skywatchers were able to witness the event. (The 1623 conjunction wasn’t visible to skywatchers on much of the Earth because of its location in the night sky, so the last time the event was visible was in 1226.)

The planets will be closest to each other in the sky on Dec. 21, appearing only a tenth of a degree apart. They will remain in close alignment for a few days and will be easily visible to the naked eye when looking toward the southwest just after sunset. While the two planets may be viewed as one point of light, they will remain hundreds of millions of miles apart in space, according to the statement from NASA.

Coincidently, this year’s great conjunction also falls on the first day of winter in the Northern Hemisphere. As a result, some have referred to the planetary alignment as forming a “Christmas star,” in reference to the Star of Bethlehem, given the event falls only a few days before Christmas.

Saturn and Jupiter have been drawing closer in the south-southwest sky for weeks. Jupiter—bigger and closer to Earth—is vastly brighter.

To see it, be ready shortly after sunset Monday, looking to the southwest fairly low on the horizon. Saturn will be the smaller, fainter blob at Jupiter’s upper right. Binoculars will be needed to separate the two planets.

A telescope will not only capture Jupiter and Saturn in the same field of view, but even some of their brightest moons.

Power Supply Disrupted Due To Jumbo Movement In Kantabanji