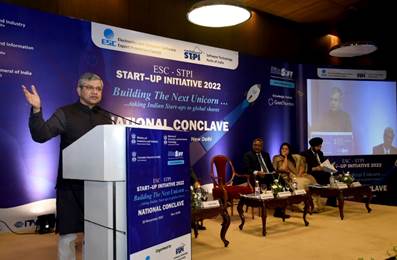 New Delhi: The Minister for Communications, Electronics & Information Technology and Railways, Ashwini Vaishnaw has said that 1 crore additional jobs can be created in the electronics and Business Processing (BPO) sector in the coming two years, given the strides the start-up sector is making in the country.

While inaugurating the National Level Start-up Initiative organized by the Software Technology Park of India (STPI) and Electronics and Computer Software Export Promotion Council (ESC), here today, the Minister said that the electronics sector alone could create additional jobs between 2.5 – 3 million and the BPO sector could make available 8 million jobs in the coming two years, which will be a substantial addition to the existing level of employment.

Vaishnaw referred to three megatrends that are unfolding in the country as envisioned by the Prime Minister, Narendra Modi. Foremost among them is determination to emerge as the technology leader powered by the country’s talent pool, ingenuity, high level of computer literacy, and commitment to excel. “We have now an ecosystem that gives importance to merit and talent, that can power innovations and disruptions,” he said, adding that such a dispensation never existed before. There is a visible drive to proliferate frontier technologies in areas like telecom, electronics, railways, and other related areas to help India to emerge as a technology leader.

Next in importance, the Minister said, is the manufacturing segment which is witnessing the mindboggling number of innovations, particularly in the mobile telephone system where India has become a major exporter now as against a net importer a few years ago. “It’s a marvellous achievement which we are trying to emulate in other segments including railways, chemicals, power and semiconductor” he said, adding that a lot of R&D efforts are currently underway to Fasttrack technological excellence in various segments.

Diversity is another trend that is discernible now, the Minister observed. This is achieved by digitally connecting tier 2 and 3 cities so that entrepreneurship can be nurtured from these cities to widen the bandwidth of the development. Of the 64 digital hubs that have been implemented, 54 are in small cities and towns, which will have a remarkable impact on the proliferation of start-ups in the country.

Earlier, welcoming the delegates, the Chairman, ESC, Sandeep Narula explained the rationale of the ESC-STPI start-up initiative. 13+ State Conclaves were organized covering Andhra Pradesh, Karnataka, Punjab, U.P., Rajasthan, Tamil Nadu, Telangana, Gujarat, Haryana, West Bengal, Maharashtra, New Delhi, and Odisha. After scrutiny by the Knowledge Partner – Grant Thornton (GT), around 300 Start-ups were invited to join these State Conclaves against 700+ nominations received. Now, the Jury at the national level will select 40 start-ups after a rigorous process of filtering to participate at the US exposure meeting for building industry linkages, interface with venture capitalists, etc. to be held on 10-11 January 2023.

Narula underscored the need for developing an Indian model of start-ups sensitive to the country’s needs, which should not give too much focus on valuation but on sustainability leading to inclusive growth.

Arvind Kumar, Director General, STPI while explaining various schemes initiated by STPI, said that presently the start-up infrastructure in the country is considerably toned up. There are facilities for funding and mentoring start-ups. The government policies also have been start-up and MSME friendly. For instance, he said, the current government has done spectrum allocation and implementation in a record time, while earlier allocations took considerably longer time.

Vicky Bahl, Partner, Grant Thronton described the global start-up landscape and stressed the need for India to align with it to move in the value chain.