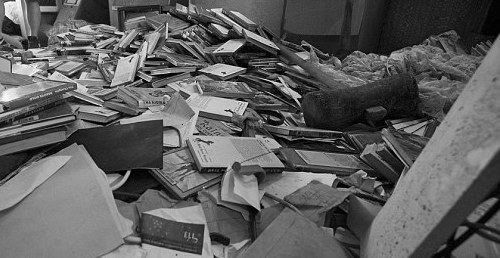 Khurda: Miscreants allegedly vandalised the house of an electronic media journalist at Kaimatia Ghatna under Jatni police station limits late last night. The victim has been identified as Chitrasen Barik.

According to sources, one Hazari Sahu allegedly built a fence by planting trees on government land, lying in front of his private property.

In order to grab the land builder had threatened the family and also attacked Hazari’s wife. With no option left Hazari Sahu lodged a complaint against the builder in the Janla outpost.

According to information, the incident took place when Barik had gone to collect the byte of Hazari’s wife and also called the builder for feedback in this regard. However, the builder refused feedback.

Irked over the matter, the accused, Tullu Sain, his son Badal Swain accompanied by 5-6 persons attacked Barik’s family in his absence and ravaged his house after hurting the family members late at night. The accused also snatched Barik’s camera.

Goons warned the family if Barik dared to telecast news against the builder then they have to go through a lot of trouble, family sources said.

On being informed, Barik reached the house. Later, he lodged a complaint by his mother Basanta Manjari Barik. A complaint has been registered and a probe has been launched into the matter, police said.