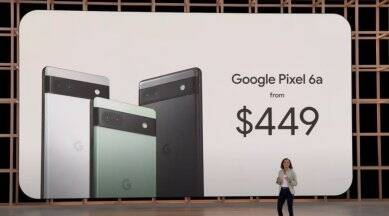 New Delhi: Technology giant Google has rolled out Pixel 6a, an affordable variant of its smart phone series Pixel 6, during its annual I/O developer conference held on Wednesday.

Google has not launched Pixel 5a in India, but it has assured the Pixel 6a will be available in the country soon. Though Google has not made it clear when the smart phone will be launched in India, but media reports suggest the variant might be accessible in Indian market by July end this year.

Design: Inspired from its predecessors Pixel 6 and Pixel 6 Pro, the Pixel comes with metal frame while its back is made up of plastic. The smart phone misses headphone jack and micro-SD card slot. The mobile will be available in three colours- Sage, Charcoal and Chalk.

Processor: The Pixel 6a has Google’s Tensor chip.

Camera: The Pixel 6a comes with dual back cameras- 12.2 MP main camera (f1.7 dual-pixel with optical image stabilisation) and another 12MP ultrawide camera. Besides, it has an 8 MP front camera.

Battery: The Pixel 6a is powered with a 4,410mAh battery with 18W fast charging.

Price: Pixel 6a is priced at $449 which roughly Rs 34,800 in Indian currency. The smart phone will be available for pre-order starting July 21 and in stores from July 28. The phone will be launched in India later this year.