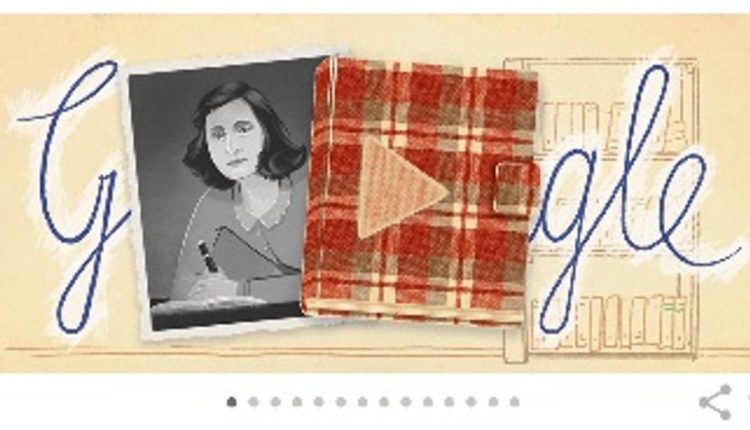 New Delhi: Today’s slideshow Doodle honours Jewish German-Dutch diarist and Holocaust victim Anne Frank. Although only written between the ages of 13-15, her personal account of the Holocaust and events of the war remains one of the most poignant and widely-read accounts to date.

Illustrated by Doodle Art Director Thoka Maer, 14 slides features real excerpts from her diary, which describes what she and her friends and family experienced in hiding for over two years. Today is the 75th anniversary of the publication of her diary, which is widely considered one of the most essential books in modern history.

The excerpts begins with a warning: “This post includes mentions of the Holocaust, which may be sensitive to some readers.”

Notably, the diary was written by Anne between the ages of 13-15. Her personal account of the Holocaust and events of the war remains one of the most poignant and widely-read accounts to date, the search engine wrote.

Annes’s personal account of the Holocaust is widely considered one of the most essential books in modern history. She was born on June 12, 1929, in Frankfurt, Germany. However, her family soon moved to Amsterdam in Netherlands to escape the increasing discrimination and violence faced by millions of minorities at the hands of the growing Nazi party.

World War II started when Anne was 10 years old. Sonn after the start of the war, Germany invaded Netherlands which brought war to the doorsteps of her family. The Nazi regime targeted the Jewish people. They were imprisoned, executed or forced to relocate to inhumane concentration camps. Millions of Jews were forced to flee their homes or go into hiding.

Like millions of others, Anne’s family was also forced to act quickly and leave nearly everything behind to seek protection. Among Anne’s few possessions was a checkered hardback notebook, a gift she had received on her thirteenth birthday just weeks earlier.
Over the following 25 months in hiding, she filled its pages with a heartfelt account of teenage life in the “secret annex,” from small details to her most profound dreams and fears. She was hopeful that her diary entries could be published after the war. Anne consolidated her writing into one cohesive story titled “Het Achterhuis” (“The Secret Annex”).

On August 4, 1944, the Frank family was found out by the Nazi Secret Service. They were arrested and taken to a detention centre where they were forced to perform hard labour. Anne and her family members were then forcibly deported to the Auschwitz concentration camp in Poland where they lived in cramped, unhygienic conditions.

A few months later, Anne and Margot Frank were transported to the Bergen-Belsen concentration camp in Germany. In addition to the brutal, intentional killings of prisoners by Nazi forces, deadly diseases spread rapidly. Eventually, Anne and Margot succumbed to the inhumane conditions they were forced to live in. When Anne died she was just 15 years old.

Although Anne did not survive the horrors of the Holocaust, her account of those years, commonly known as “The Diary of Anne Frank,” has since become one of the most widely read works of non-fiction ever published. It was translated into upwards of 80 languages. Frank’s memoir is a staple in today’s classrooms and is being utilised as a tool to educate generations of children about the Holocaust and the terrible dangers of discrimination and tyranny.

Fuel prices in Odisha on June 25