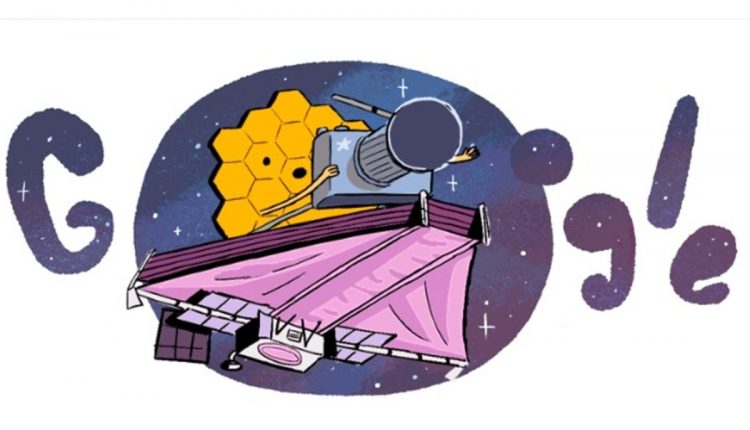 California: In an ode to the deepest images of the cosmos taken by NASA, the Google Doodle on Wednesday showed an animated James Webb Space Telescope (JWST) taking the photos.

Are we alone in the universe? How’d we get here?

Dubbed the ‘golden eye’ by scientists, the doodle shows the gold-coated, flower-shaped mirror of the telescope perched atop a spacecraft. The doodle then shows the images captured by the JWST including that of the Deep Field which illuminated thousands of galaxies and the faintest objects.

JWST also captured breath-taking images of the Carina Nebula, one of the largest and brightest nebulae in the sky, Southern Ring Nebula, a cloud of gas surrounding a dying star, and Stephen’s Quintet, a group of five galaxies where four of them are locked in a “cosmic dance” of repeated close encounters.

The American space agency on Tuesday released the first full-color, high-resolution pictures from the largest, most powerful observatory ever launched to space, designed to peer farther than before with greater clarity to the dawn of the universe.

The debut photos, which took weeks to render from raw telescope data, were selected by NASA to show off James Webb Space Telescope’s capabilities and foreshadow science missions ahead.

Webb telescope is the largest, most powerful, and most complex infrared telescope to ever be put into space—and the largest international space endeavour in history.

The $9 billion infrared telescope, built for NASA by aerospace giant Northrop Grumman Corp, is expected to revolutionize astronomy by allowing scientists to peer farther than before and with greater clarity into the cosmos, to the dawn of the known universe.

The JWST is named after NASA’s second administrator, James E Webb, who led the Apollo missions that landed the first humans on the moon.

A partnership between NASA, the European Space Agency and the Canadian Space Agency, the Webb was launched on December 25, 2021, and reached its destination in solar orbit nearly 1 million miles from Earth a month later.