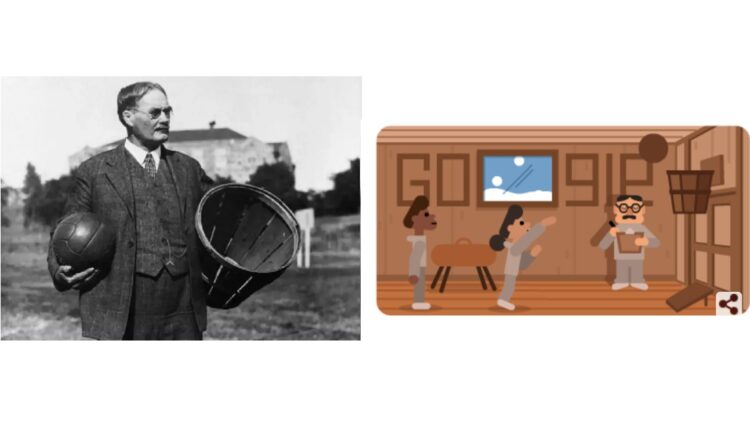 Naismith invented the game of basketball in 1891.

Born in Ontario, Canada, in 1861, Naismith was a talented athlete at McGill University in Montreal, playing Canadian football, lacrosse, rugby, soccer and gymnastics. After earning a bachelor’s degree in physical education in 1888, Naismith took a job teaching physical education at the YMCA International Training School in Springfield, Massachusetts.

While at the Springfield YMCA, Naismith was tasked with creating an indoor game that would provide the “athletic distraction” for rowdy students during the harsh New England winters. He posted 13 rules of his new game on a bulletin board, and his unenthusiastic class took to the court to give it a shot (or two) on Dec. 21, 1891.

Using a soccer ball, the nine players on each side would pass (not dribble) the ball down court before taking a shot not at a hoop but at a peach basket 10 feet off the floor. The game of “Basket ball” was born. The inventor declined suggestions to call his new sport “Naismith ball,” and by 1893, its popularity began to spread internationally through the YMCA movement.

Naismith was a strong opponent of segregation and strove to improve racial relations. And though he couldn’t get Black players on the KU varsity basketball team, he did help Black students win access to the school’s formerly all-white swimming pool.

Naismith retired from the university in 1937 and died two years later at the age of 78, of a brain hemorrhage.

The NBA’s Hall of Fame, located in Springfield, Massachusetts, is named in his honor. The game he invented is now played in nearly 200 countries around the world.

Centre “disapproves” administration of Covaxin to those below 18 yrs