From Warner Bros. Pictures and Legendary Pictures comes the long-awaited face-off between two icons in the epic adventure “Godzilla Vs. Kong,” all set to release in India on March 24 in English, Hindi, Tamil and Telugu.

The new Hollywood creature feature will now release in India on Wednesday, March 24, two days ahead of its initial international release date.

Legends will collide with “Godzilla vs. Kong”, as these mythic adversaries meet in a spectacular battle for the ages, with the fate of the world hanging in the balance.

Millie Bobby Brown, who originated the role of the apex activist Madison in “Godzilla” and took her to the next level in “Godzilla: King of the Monsters,” returns to lead Team Godzilla as he faces off against the massive ape.  This is Brown’s first collaboration with director Adam Wingard. 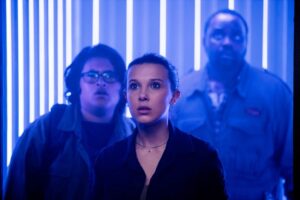 Talking about her working experience the actress says, “I loved working with Adam. He’s a pure Godzilla fan, and when you work with someone who is the biggest fanboy of an iconic movie or series, you can’t help but have the ultimate respect for them. It’s fantastic to work with someone who is so dedicated and motivated and appreciative of the chance to work on a property they’ve been studying their whole life.”

Being in charge of the safety of Godzilla, Brown’s on screen avatar – Madison feels immensely protective of the largely misjudged creature. Talking about her character and that special connection between Madison and Godzilla, Brown says, “I’ve always felt Madison is a really relatable teenager who just goes through things that are obviously quite extraordinary. I mean,seeing a monster like Godzilla right in front of your face is probably not going to happen to most of us, but like all kids, she has something to say and she wants to be heard, to have a voice. For me, that’s what she’s always brought to the table as part of her family: a point of view. It might be different from her parents’, but she’s always been around their work as scientists, so it’s had an effect on her, and now she’s really good at educating herself about what’s going on, especially where Godzilla’s concerned.”