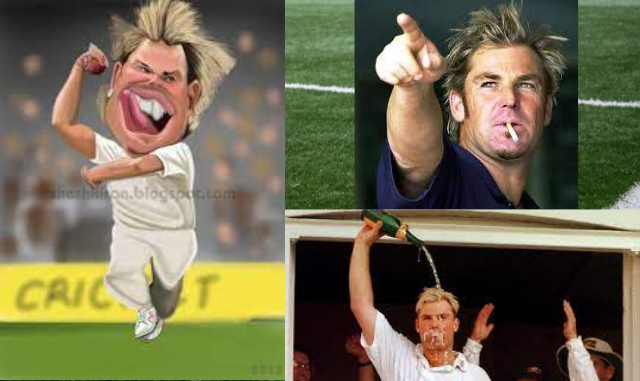 Shane Warne was never about innocence, he was always the romance of cricket. He did not play the sport like boys do, he was always an adult playing mind-games. He did not approach cricket like a game of chance or glorious uncertainties, he plied his trade by luring, teasing, testing, trapping and outfoxing the opponents. I like this word- outfox, it describes perfectly what Warnie’s intentions always were. That was the aim, to outfox, and then celebrate with joyous abandon- index finger pointing upwards, vigorous shaking of the clenched fist, boisterous laughter to go along and the prized expression that relayed I-have-your-number.

Of course, many a time he failed to achieve what he set out for. But his broad shoulders never sagged, and his fat fingers never asked for a reprieve. The hair kept standing on his head like a lion’s mane, from his eyes emanated confidence behoving an Emperor. Shane had the physique of a weightlifter or an arm-wrestler, but shone as a leg spinner. With his personality, he would have made it big even as a stock broker or a bank clerk. A leggie superstar! Who saw him coming, especially after a very forgettable debut at Sidney in which Shastri and Sachin made mincemeat out of him?

How he conducted himself before delivering the balls- rolling up his sleeves, surveying the park with a predator’s gaze, setting the field with a surgeon’s precision, eyeing the batsman and the camera with a I’ve-figured-you-out-mate look, gentling easing into his run-up with jiggling hips and bringing up the bowling arm at forty five degree angle, free-flowing body devoid of any tension- is what made him such a huge star. What happened after they were delivered won Australia matches, made him the greatest spinner and shall live-on in record books forever.

Warnie has numbers going for him, yet they do not fully capture the phenomenon that Shane Warne was. He remained a looming question mark over every match he played. The match was not decided till Shane had had his say. He could walk on water, spin on glass wickets and bring back the dead to life. It was not over till he had bowled his last. He was expected to conjure tricks out of thin air. He always looked capable of springing a surprise, more often than not he delivered on the promise.

Shane made sexting fashionable, leg spin irresistible, battled with flab, flirted with botox, dabbled with diuretic drugs, played poker and was fond of dating apps. With his personal example, he warned the world about the perils of making personal sex-tapes or losing weight through pills. He captained club sides with panache, never kept an idea to himself if he could broadcast it and generally gave coaches a very hard time. As per the great Warnie, a coach was something you travel in to get to the game. That’s how little he thought of John Buchanan’s boot-camps and professorial manner. Paradoxically, just last month, he had expressed his ardent wish to coach the English side. He was not destined to be even rejected from this role he sought.

The great man enjoyed an extended and satisfying run. He played for as long as he wanted and although I think he could have easily dragged on for 2-3 years longer, yet he departed on his own terms. He lit up global T20 leagues for long enough to leave indelible mark. Warne led Australia in eleven one –day matches, and won every single one out of them. That the most successful ODI captain never led the Ozzies in tests is a delicious irony. Warne as a full time skipper might have been like Churchill, Hitler, Stalin or Ataturk, we would never know. He would certainly have been more interesting that Punter or Gilly, that’s for sure. If one sets about counting the number of his liaisons, wickets or beers, Warnie has left behind a rich body of exploits. We can mourn his death for now, but celebrating his immortal greatness seems more appropriate.