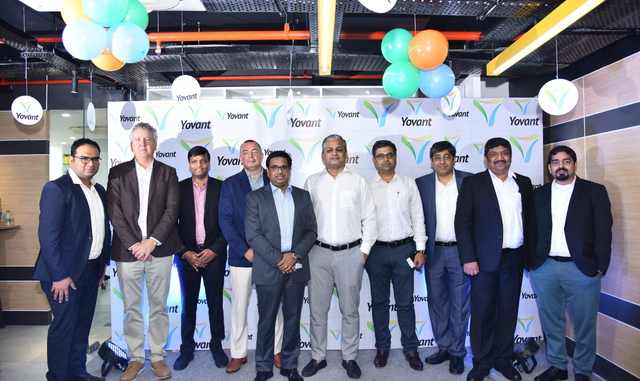 To create 250 job opportunities in the city

Bhubaneswar: Yovant, a Global IT Services company that provides Consulting, Technology and Digital Transformation services was inaugurated in the temple city Bhubaneswar by Manoj Kumar Mishra, Secretary, Electronics & IT, Department of Science and Technology as Chief Guest and Shri Manas Ranjan Panda, Director, Software Technology Parks of India as Guest of Honour.

Speaking on the occasion, Manoj Kumar Mishra, Secretary, Electronics & IT, Department of Science and Technology said, “I am glad to inaugurate Yovant in Bhubaneswar which although is a start up but has reached heights in a very short span of time. Comparing Yovant’s other 4 campus, Bhubaneswar campus is the largest.”

“Notably, in the last few months, around 5 to 6 IT companies have come up with their set ups in Bhubaneswar and few are already in the pipeline to establish their set ups in our city which is hugely going to create employment opportunities for people of Odisha in this sector” he further added.

Started in the midst of Covid outbreak, Yovant has opened its 4th Centre in Bhubaneswar after Columbia (South Carolina, US), Pune & Bengaluru. Yovant provides Consulting, Technology and Digital Transformation services with a focus on Insurance carriers in the USA & UK. Yovant is aggressively building teams on the next-gen Low Code No Code Insurtech Platforms.

Speaking on the vision of the company, Mr. Prabir Kumar Panda, COO of Yovant said, “Yovant was started in November 2020 during COVID and today we have our fourth office inaugurated in Bhubaneswar which is a huge success for us. We aim to create 250+ jobs in Bhubaneswar and make Yovant one of the successful IT companies in the state.”

It should be noted the founding team of Yovant were part of the co-founding team of TCube Solutions in Bhubaneswar and were instrumental in bringing Capgemini to Odisha by the mode of acquisition.

a Global IT Services companyYOVANTYOVANT Opens In Bhubaneswar