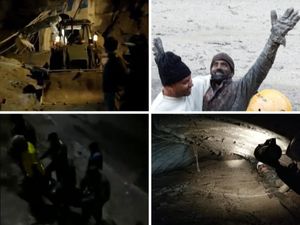 Dehradun: After brief halt, NDRF, ITBP personnel and other volunteers have started rescue operation at Tapovan tunnel in Uttarakhand.

Rawat has announced financial assistance of Rs 4 lakh each to the kin of the deceased while Prime Minister on Sunday announced ex-gratia of Rs 2 lakh each for the next of kin of those who have lost their lives.

The PM also announced Rs 50,000 from Prime Minister’s National Relief Fund (PMNRF) for the people who were seriously injured.

Latest reports said rescue efforts at present are focused on fishing out 30-35 workers trapped in a tunnel. JCBs and Pokland machines are being used to cut into the debris clogging the tunnel to rescue the trapped workers.

Ministry of Foreign Affairs, Nepal, has expressed shock over the flash flood caused by an avalanche in Uttarakhand. It expressed deep condolences to the bereaved family members of the deceased and pray for the safety of those missing.

A major tragedy was reported in Uttarakhand’s Chamoli on Sunday after a part of the Nanda Devi glacier broke off at Joshimath in Chamoli district of Uttarakhand.