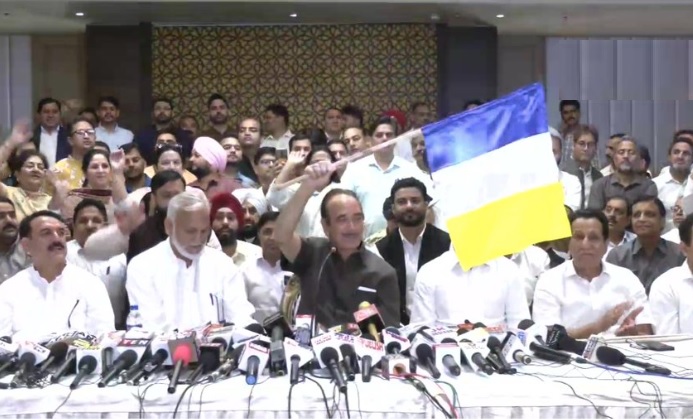 Flag of the party was also launched that has three colours – mustard, white and blue.

Azad, in his first public meeting in Jammu after quitting Congress, had announced to launch of his own political outfit that will focus on the restoration of full statehood.

He had said that the people of Jammu and Kashmir will decide the name and the flag for the party.

Azad resigned from the all-party post last week. Notably, he has been Chief Minister of J-K from 2005 to 2008.

In his resignation letter to Sonia Gandhi, he had targeted party leadership, particularly Rahul Gandhi, over the way the party has been run in the past nearly nine years.

Azad had claimed that a coterie runs the party while Sonia Gandhi was just “a nominal head” and all the major decisions were taken by “Rahul Gandhi or rather worse his security guards and PAs”.

Azad had said he was submitting his resignation with “great regret and an extremely leaden heart” and severing his 50-year association with the Congress. He was earlier Leader of Opposition in Rajya Sabha.

Recounting his long association with the Congress, Azad had said the situation in the party has reached a point of “no return.” While Azad took potshots at Sonia Gandhi in the letter, his sharpest attack was on Rahul Gandhi and he described the Wayand MP as a “non-serious individual” and “immature”.