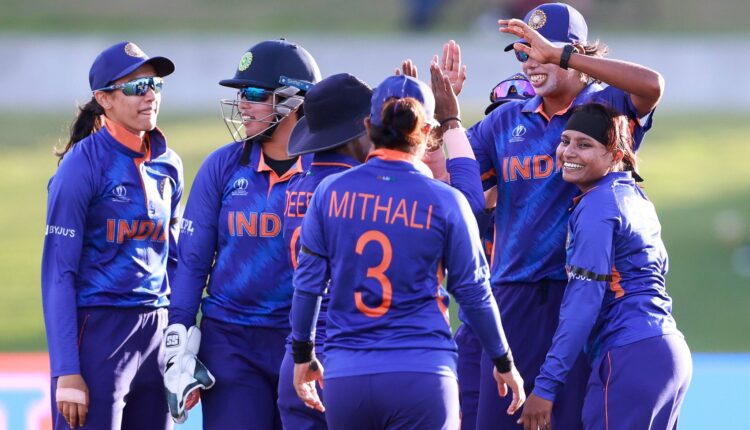 Mount Maunganui: Pooja Vastrakar’s batting heroics and Rajeshwari Gayakwad’s bowling masterclass helped the Indian team side to a memorable win over arch-rivals Pakistan in their campaign opener of the ongoing ICC Women’s World Cup 2022 on Sunday.

Team India extended their winning run against Pakistan by defeating the Bismah Maroof-led side by 107 runs.

Chasing a par total of 245, Bismah Maroof’s women never got going and were eventually bundled out for 137 in 43 overs, handing India a massive win and a big boost of Net Run Rate in the opening game.

Batting first in the high-voltage clash between arch-rivals India and Pakistan on Sunday, the Mithali-led side suffered an early setback in the form of talented opener Shafali Verma, who was handed a 6-ball duck by Diana Baig in the 3rd over.

Opener Smriti Mandhana and Deepti Sharma steadied the ship for India by adding 92 runs for the second wicket against the Green Army. While Deepti chipped in with a crucial 40-run knock, Mandhana slammed her 21st half-century to become the 4th highest run-getter for the Indian women’s team in the 50-over format. Rana played an unbeaten knock of 53 while Vastrakar fired 67 off 59 balls to help India post 244-7 in 50 overs.
Vastrakar and Rana’s 122-run partnership was India’s first century partnership at the Women’s World Cup.

While bowling, Gayakwad demolished the Pakistani batting attack by taking 4 wickets and leaking 31 runs. Gayakwad’s matchwinning spell helped India to bowl out Pakistan for 137 in 43 overs.

India will next face New Zealand at Seddon Park in Hamilton on Thursday. Notably, they had lost an ODI series 4-1 to the White Ferns last month as they geared up for the World Cup.