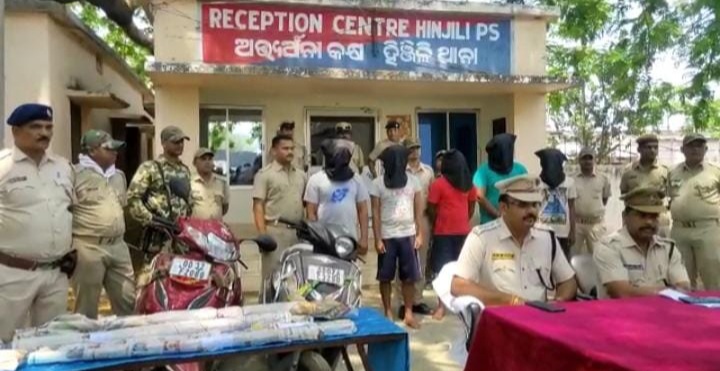 Berhampur: Five persons have been arrested in connection with the murder of four brothers, including a cousin, following a clash at Pitala Chhak under Hinjili police station in Ganjam district on March 22 over the passing of lewd comments.

As per the investigation, the deceased Sambhu Swain, his brothers Raja Swain, Pandab Swain, and cousin Chandan Swain, were running a fast food shop at Pitala Chhak.

On the evening of March 22, there was an exchange of hot words between accused Sadhu, Bahanpati, and deceased Sambhu. Anticipating danger from Sahu, Sambhu called his brother Raja to the spot.

When Raja came to the spot, Sadhu became more furious. Threatening both the brothers with dire consequences, he left the spot with Bahanpati.

After some time, i.e. late night of March 22, the accused persons, armed with the wooden handle of a spade, bamboo, etc., arrived at the spot on two scooters. All of sudden, they attacked the brothers and decamped from the spot by leaving them in a pool of blood.

During the investigation, the dead body was sent for post-mortem. Clues and the weapons of offense were seized from the spot with the assistance of the scientific team and witnesses were examined.

The blood-stained apparels along with other materials were seized from the accused persons. So far, the involvement of six accused persons has been established. Out of them, five were arrested. The investigation of the case is in progress.

Besides the weapons of offense and blood-stained apparels of accused and deceased persons, police have also seized one Honda Activa, and one Yamaha Fascino.

Undo The Damage Of Your Desk Job With These Yoga Asanas