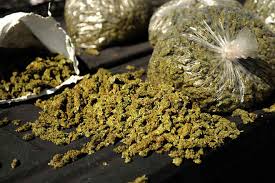 Koraput: Lamtaput and Padua police have seized over 700 kilograms of Ganja (dry cannabis) following raids in the district in the past 24 hours.

The market price of the seized narcotics is said to be over Rs 70 lakh.

According to reports, a police team was on inspection at Changudipada Chhak last night when they intercepted a pickup van and a SUV. During the search, the cops seized around 480 kilograms of Ganja from both the vehicles.

Sources said the vehicle was engaged in the transportation of the Ganja to Jeypore from neighbouring Andhra Pradesh.

In another incident, Padua police also seized around 236 kilograms of Ganja during patrolling from a mini truck last night.

Preliminary investigation reveals that bulk of the Ganja consignment from Odisha was supposed to be trafficked to several parts of Andhra Pradesh, Bihar, Uttar Pradesh and Chhattisgarh.

Two teams led by Koraput SDPO Sanjay Mohapatra were constituted and raids were conducted at different parts of the district.