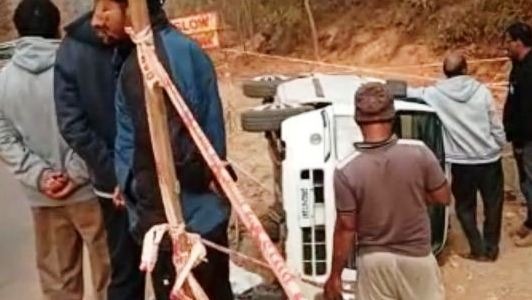 Kandhamal: A ganja-laden car overturned at Dhungiya valley under K. Nuagaon police station limits in Kandhamal district while miscreants were speeding the vehicle in an attempt to escape from the police.

Reportedly, police arrested a woman in this connection.

Acting on a tip-off, cops laid a trap to nab the smugglers, however, spotted the police, the miscreants tried to take an u-turn when the vehicle turned turtle.

Taking advantage of the situation, the two of the smugglers escaped from the spot and ran into the nearby forest. However, the cops managed to nab the accused woman.

The cops also seized 87kg of ganja and the car in which the contraband consignment was being smuggled.

The arrested woman has been forwarded to the court and a manhunt was launched to nab the absconding smugglers, police said.

Odisha To Receive 1,49,760 Doses Of Covaxin Within A Week