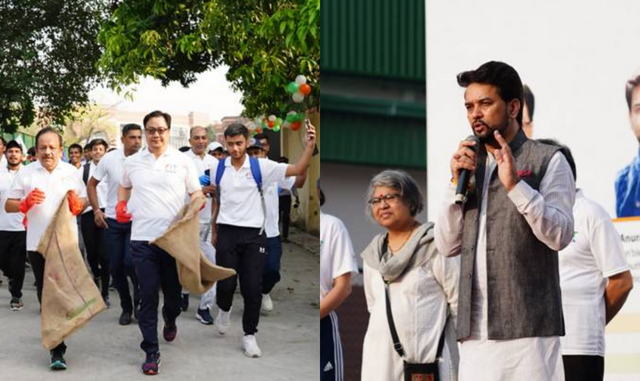 New Delhi: The launch of Fit India Freedom Run 3.0 took place at the Major Dhyanchand National Stadium in New Delhi on Sunday morning on the occasion of Gandhi Jayanti today.

One of the biggest nationwide movements started by the Government of India during the peak of Covid-19 pandemic in 2020, the third edition was jointly launched with a Fit India Plog Run by Union Minister of Law and Justice,  Kiren Rijiju and Union Minister of Youth Affairs and Sports Anurag Singh Thakur. The third edition of the Fit India Freedom Run started off today, October 2 and will go on until October 31.

Also in attendance on Sunday was former Health Minister of India Harshvardhan Goel, Secretary Sports Smt. Sujata Chaturvedi, Director General, Sports Authority of India  Sandip Pradhan, Fit India ambassador Ripu Daman Bevli as well as other officials from the Sports Ministry and SAI along with a large number of participants.

Reiterating the Prime Minister’s vision, Kiren Rijiju mentioned, “When  Narendra Modi launched the Fit India movement in 2019, his vision was to make the entire nation fit. This movement over the years has now become such a massive success. Everyone is now interested to join the movement and the Fit India mobile app is also being downloaded with much enthusiasm every single day.”

Echoing his sentiments on the same lines, Anurag Singh Thakur mentioned, “From Azadi ka Amrit Mahotsav to Amrit Kaal, we have to keep working towards Prime Minister’s vision of taking India to new heights and the first way to reach that goal is by taking our fitness to new level.”

Urging for a record number of participation in this edition of the Freedom Run, Thakur added, “There is no better occasion than to start the third edition of this successful run on Gandhi Jayanti and culminate it on Ekta Divas – the birth anniversary of Sardar Vallabhbhai Patel on October 31. Last year, the total participation reached 9 crore 30 lakh and we have to give a lot of strength to Fit Freedom Run 3.0 to double the participation numbers.”