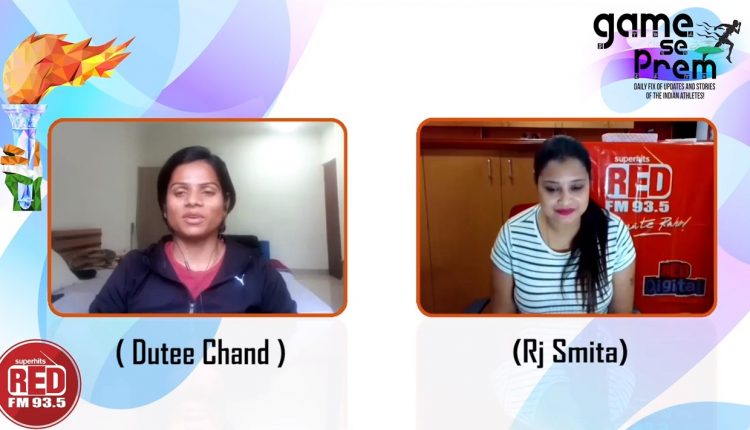 Bhubaneswar: India’s national record holder in women’s 100m, Dutee Chand, today fell short of striding her way to the next round as she finished seventh with a timing of 11.54s in heat 5 at the Tokyo Olympics.

The ace sprinter from Odisha, Dutee Chand, fought back and overcame all obstacles that came her way to be India’s Fastest Female Sprinter. She will have another chance as she has also qualified for the Olympics in 200m race on the basis of world rankings.

As she goes into the all-important qualifying heats for getting into the Semis of 200m at Tokyo 2020 Olympics, scheduled for 31st of July, ‘Bhubaneswar Ki Rani’ RJ SMITA of Red FM spoke to the champ a few days back before she left for Tokyo and this part zoom interview with the champion will tell us more about Dutee beyond what we may have read!

When asked about the role Odisha Mining Corporation plays in her life, Dutee said that after working in the Railways as a TT, she joined OMC in 2016 after Hon’ble Chief Minister of Odisha took her request to work in Odisha. After joining OMC,  I have bagged several feats. The company has always supported me by making me Duty-Free in order to focus in my training, and also in means of financial support.”

Dutee also highly praised the all the staff and officials of OMC. She said that they encourage her in all ways and also felicitate her for the feats. She also sought blessings from all for achieving success in the Tokyo Olympics and making the country as well as the state proud.

On being asked what kind of tip would she like to take from a legend like Usain Bolt, Dutee said: “Well, I have met him a few times. But, why would I need running tips from a man!! I rather go to a female winner and ask.”

Watch this space for more stories of Indian athletes who have defied all odds and have made it to the biggest sporting event in the world! Their ‘Game Se Prem’ really inspires us!