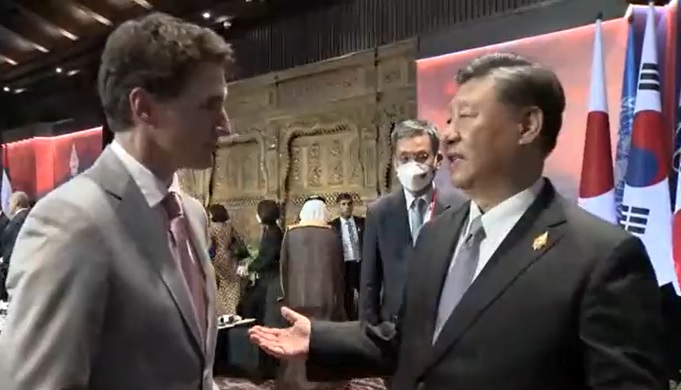 New Delhi: Chinese President Xi Jinping and Canadian Prime Minister Justin Trudeau had a heated exchange of words where the former expressed displeasure over leaking of details of the conversation between the two world leaders.

The tough talk between the leaders took place on the sidelines of the G20 Summit in Bali.

In a video captured by the Canadian press, Xi can be heard expressing displeasure over everything discussed between the two “has been leaked to the paper(s). “That’s not appropriate and that’s not the way the conversation was conducted,” Xi Jinping can be heard saying.

The Canadian Prime Minister was heard responding cordially, “In Canada, we believe in free, and open, and frank dialogue and that is what we will continue to have. We will continue to look to work constructively together, but there will be things we will disagree on.”

The Cdn Pool cam captured a tough talk between Chinese President Xi & PM Trudeau at the G20 today. In it, Xi express his displeasure that everything discussed yesterday “has been leaked to the paper(s), that’s not appropriate… & that’s not the way the conversation was conducted” pic.twitter.com/Hres3vwf4Q

The two leaders also discussed Russia’s invasion of Ukraine, North Korea, and the importance of December’s summit in Montreal “to protect nature and fight climate change, as per the Reuters report.

After Trudeau’s reply, the two leaders could be seen shaking hands and went separate ways, with Xi maintaining his demeanour of a smiling but disappointed headmaster, and saying, “That’s great, but let’s create the conditions first.”

Woman Critical After Coming In Contact With Live Wire In…

Hackers On Prowl: ICMR Website Attacked 6000 Times In A…