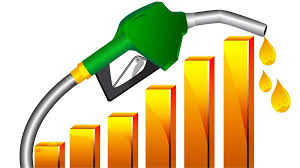 New Delhi: Petrol and diesel rates across the country hit fresh record highs on Tuesday after they were hiked sharply for the eighth consecutive day. Petrol price has been hiked by roughly 30 paise across the country, while diesel has increased by approximately 35 paise.

Following today’s hike, petrol prices in Delhi climbed to Rs 89.29 (30 paise increase) a litre as against Rs 88.99 on Monday while diesel price jumped to Rs 79.70 per litre as compared to Rs 79.35 a litre on Monday, as per data from Indian Oil Corporation website.

In the last eight days, the petrol price has gone up by Rs 2.36 per litre for petrol while diesel rate has risen by Rs 2.91 a litre in the national capital. Petrol price in Delhi crossed Rs 89 per litre mark for the first time ever as OMCs continue to raise auto fuel prices in line with costs.

In several other cities in the two states and in Madhya Pradesh, the fuel variety has either crossed Rs 100 per litre mark or is precariously close to the mark with reaching the miles atone as early as tomorrow if there is further price increase by OMCs.

Rain Alert! Weather Forecast For These Odisha Dists From Feb 16-19