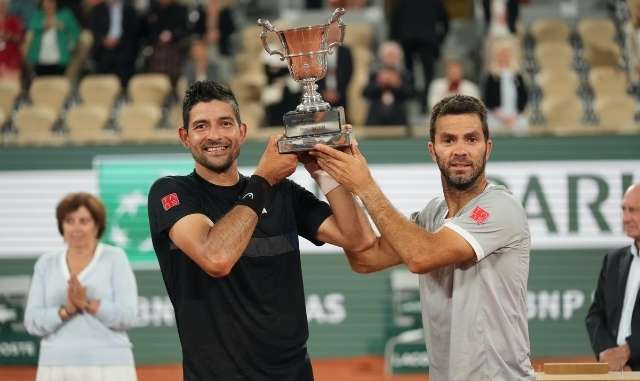 After saving three match points to survive a tense second set against Ivan Dodig and Austin Krajicek, there was an air of inevitability in the play of Jean-Julien Rojer and Marcelo Arevalo as they marched through a second-set tiebreak.

In the third set, as tension mounted, they didn’t skip a beat.

The 12th-seeded tandem topped the unseeded Croatian and American duo 6-7(4), 7-6(5), 6-3 on Court Philippe-Chatrier to make history on many different levels.

“I’m really proud of that,” Rojer told the crowd of his milestone. “I know I’m getting older and it makes these moments that much more special, because you don’t know how many times you have left to play on such a beautiful court at these beautiful tournaments – I’m extremely grateful.”

“I’m so proud to have everyone of you, staying for the final,” Arevalo added. “You guys made our moment precious – thank you, Paris, and thank you Roland-Garros.”

Rain came pouring down in Paris on Saturday after the women’s final, and the roof remained close for the entirety of the match as the storm persisted, but the unique conditions didn’t affect the quality of play.

The contest was nip-and-tuck throughout.

Dodig and Krajicek, who saved five match points against top-seeded Rajeev Ram and Joe Salisbury in the quarter-finals and toppled the No.8, No.1 and No.4 seeded duos to reach their first Grand Slam final as a team, were formidable on serve throughout the first two sets.

Though they failed to convert on any of their eight break points in the opening two sets, they were untouchable on serve.

Dodig and Krajicek did not face a single break point and eventually broke through in the first-set tiebreak, earning four set points when Arevalo double-faulted. On the next point Krajicek hammered a rocket serve that glanced off Rojer’s racquet to clinch the opening set, 7-6(4).

Krajicek and Dodig held form for nearly all of the second set but the tides would turn in the 12th game, when Rojer saved three championship points while serving to force a tiebreak.

Arevalo and Rojer soldiered through a tight tiebreak, Rojer tapping a backhand volley winner to seal the set, and the pair carried their momentum forward into the decider.

Two more break points would go begging for Dodig and Krajicek early in the third set, and in the sixth game Arevalo and Rojer made their move.

The pair created two break points with Krajicek serving, and Rojer cracked a clean forehand winner on the second to put his team ahead 4-2.

Two games later Arevalo stepped to the service line and handled his business with aplomb, serving out the title at love as joyous bedlam ensued.

Moments later Arevalo was in the crowd, embracing his team, and his wife, with the flag of El Slavador draped around him.