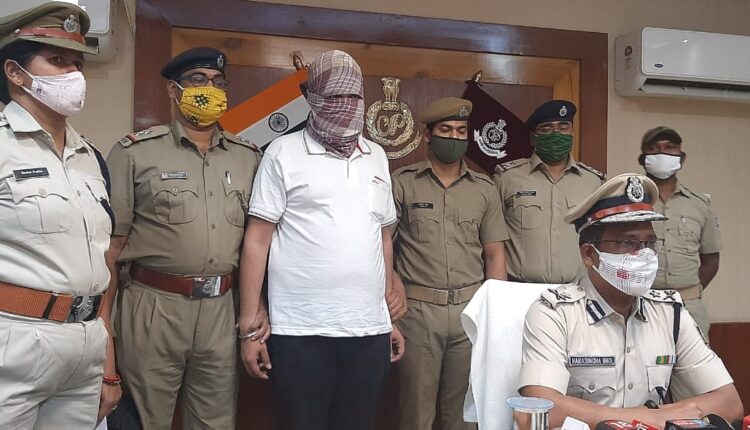 Sambalpur: Police have nabbed a fraudster from Delhi on charges of swindling Rs 28 lakhs from a businessman in Sambalpur district on the pretext of supplying face masks.

The arrested cyber fraud has been identified as Jatin Sehgal (23) of Faridabad, Haryana. Mobile phones, more than 10 SIM cards, ATM cards of different banks and cash of Rs.10, lakhs have been seized from his possession, informed IG Narasingha Bhol in a press meet today.

A special team comprising Inspector Tarabati Pradhan, SI Subrat Kumar Meher, SI Debadutt Bastia and Maheswar Sahu of Cyber Police Station, Sambalpur camped in Delhi/Ghaziabad/Faridabad for a week and was able to apprehend the accused Jatin Sehgal from Faridabad on March 23. He was produced in the court of JMFC, Faridabad on March 24. The accused has been remanded to police custody of Cyber Crime PS, Sambalpur, the police official said.

As per the case details, the accused duped the complainant of Rs 28 lakhs by promising to supply face masks. He got in touch with the complainant through a Facebook advertisement where he had provided false information about his business.

Manoj expressed his interest to buy Face Mask in a bulk quantity and initially deposited Rs 3 lakh in the bank account provided by the accused.

With an intention to extract more money, the accused prepared a false DHL Express invoice, which induced a false belief in the victim that the accused will supply Facemasks from a firm in Malayasia through intermediary firms in Oman, Dubai and Muscat. Believing the accused, the victim further deposited Rs 25 lakh through PhonePe account and other accounts provided by the accused for an order of 11,500 Facemasks.

A total amount of Rs 28 Lakhs was deposited in the account provided by the accused. After that the accused transferred some amount to other accounts and withdrew the rest amount. After getting the entire money, the accused switched off his phone and the victim was unable to establish any communication.

The special team managed to nab the accused after persistent efforts. During the course of investigation, two bank accounts of the accused have been frozen and further probe is underway, the police officials said.