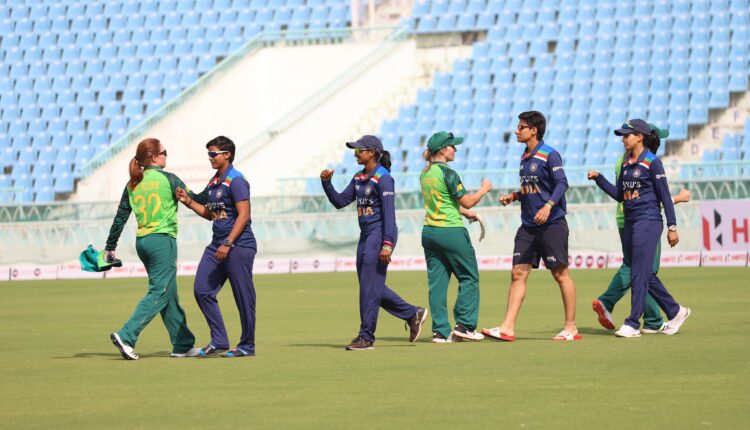 Chasing the highest total of the tour so far of 267, South Africa cruised to a brilliant seven-wicket win in the fourth ODI against India.

They pull off their highest successful run chase in women’s ODIs by defeating India by seven wickets.

Openers Lizelle Lee and Laura Wolvaardt built the foundation of the innings which allowed Lara Goodall and Mignon du Preez to steer South Africa to a record series win in India.

Losing the toss and put in to bat, India were helped by Punam Raut’s impressive knock of 104* runs from 123 balls with worthy contributions from skipper Mithali Raj (45) and Harmanpreet Kaur (54). India put up a commendable total of 266/4 on board.

Earlier, India got off to a shaky start as Smriti Mandhana departed after edging Shabnim Ismail’s ball straight to slips, she became Ismail’s 150th victim in ODIs. Priya Punia was joined by Raut in the middle as the pair began to recover India’s innings. The 44-run second-wicket stand was broken by Nondumiso Shangase.

Raj and Raut then came together at the crease and anchored India’s innings, sharing a partnership of 103 runs to push the team’s score past 164, which also saw Raj become the first woman cricketer to score 7000 runs in ODIs. However, with just five runs away from her half-century she was caught by Ismail at mid-on of the bowling of Sekhukhune.

Harmanpreet Kaur then got off to a swift start, scoring two boundaries in her first four deliveries. Thereon, both batters stepped on the accelerator. Kaur was the aggressor with Raut supporting her from the other end. The pair put up a partnership of 88 runs during the course of which Kaur scored a quick 50 off just 33 balls, before departing to Sekhukhune. Shortly after Kaur’s dismissal, Raut scored brought up her third ODI century to help India achieve a competitive total.

Chasing 267, South Africa got off to a flying start, with Lee and Wolvaardt putting on 59 runs within the first powerplay. The pair went on to combine for a partnership of 116 for the opening wicket and brought up their respective half-centuries.

Kaur was the bowler successful in breaking up the threatening partnership when she dismissed Lee lbw. Shortly after that Wolvaardt also lost her wicket to Mansi Joshi.

After the loss of both openers, du Preez and Goodall propelled South Africa’s innings. They put on 103 runs for the third wicket and despite du Preez’s wicket in the 45th over, they secured a comfortable victory to take an unassailable 3-1 lead in the series.

The final ODI will be played at the same venue on 17 March.

Youth shot at over ‘past enmity’ in Berhampur