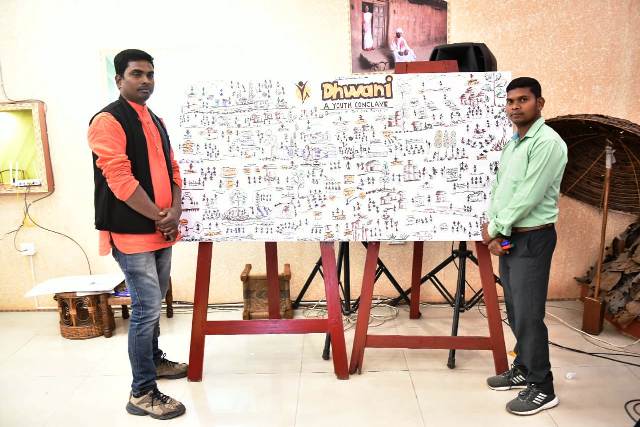 Jamshedpur/Jajpur: Day 2 at Dhwani commenced with reflecting on the thoughts and perspectives laid down by India’s foremost thinkers, Swami Vivekananda – Arise, awake, and stop not till the goal is reached. Joining the conclave digitally were over 900youngsters from 8 locations across Jharkhand and Odisha.

In a session with Ravi Choudhary and Anjali Dalmia ‘Youth engagement for Climate Action’ was explored. The conversation revolved around the importance of youth mobilisation at the local level and the need for environmental protection measures to move in tandem with development.

Mr Pravin Nikam, Founder ROSHNI Foundation & National Youth Awardee 2016 while encouraging the youngsters at the conclave expressed, ‘Always find your calling, persistently work towards your goal and strive for excellence in your chosen field.’

During the session on ‘Representation in key decision-making processes’, Arati Devi, Ex-sarpanch of Dhunkapada, Odisha put forth her perspective on the role of youth in local governance systems while Bhakta Hansda, Manjhibaba from Purihasa Jharkhand, explained how youngsters can contribute to traditional governance systems.PriyankaKumari from Jamadoba and PratibhaKumari from West Bokaroexpressed their concern over the lack of awareness of women’s rights within their area.

Emphasising on the importance of dialogue and discussion, Mr Chanakya Chaudhary, Director, Tata Steel Foundation stated, ‘It is important to have an opinion and it is even more important to put our opinions across in the appropriate forums. There is enough space in the governance and policy platforms for the voice of youngsters, and it is up to the youth to take responsibility and take the baton of nation-building forward.’

The conclave witnessed an expression of the youth perceptions and emotions through nukkad nataks, dance performances and skits. The essence behind the discussions during the two-day conclave were artistically captured by Madhusudan Majhi and ManasNayak from Kalinganagar on a canvas.

Concluding the conclave, Mr Sourav Roy, Chief, Corporate Social Responsibility, Tata Steel said, ‘In a year such as this, the pursuit is one of hope and youth remain an embodiment of this. The digital format of Dhwani has brought together relevant perspectives of over 900 youngsters which will be encapsulated in a youth aspiration report.’