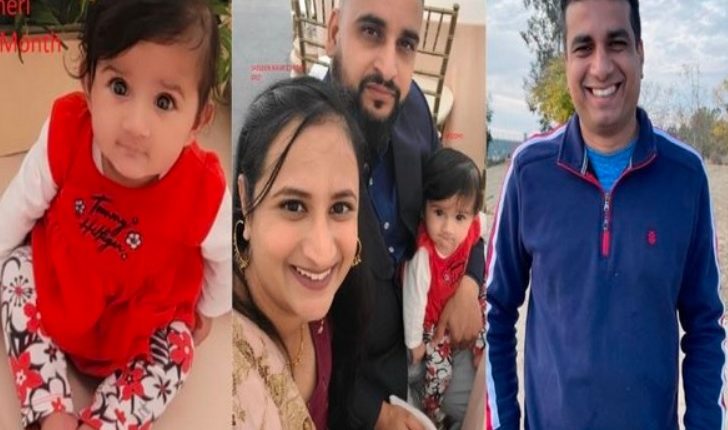 KeralaIndian-origin baby, An eight-month-old infant, her parents and uncle who were kidnapped from Merced County in California were found dead, the local sheriff confirmed on Thursday. The family was of Indian origin and went missing on Monday. A 48-year-old man was taken into custody in connection with the case which so far was of kidnapping. Nine

“It’s horribly, horribly senseless,” Merced County Sheriff Vern Warnke said as quoted by the CNN. According to reports, the person who has been held was spotted on a surveillance video. In the video, the man could be seen forcing the family into the truck.

The eight-month-old infant, her parents Jasleen Kaur and Jasdeep Singh and uncle Amandeep Singh were missing since Monday following which their family members appealed to the authorities for help.

Merced County Sheriff Vern Warnke said the man in custody was convicted in 2005 in a case involving armed robbery and false imprisonment. But it is unlikely that he was alone.

‘Jasdeep and Amandeep Singh’s hands were tied’
In the video which is one of the pieces of evidence that the police have, Jasdeep and Amandeep were seen arriving at there family truck business nine minutes apart. Jasdeep then encountered a man who carried a trash bag. The man then seemed to pull out what seemed to be a firearm, CNN reported.

Then Jasdeep and Amandeep were seen — their hands tied behind their backs — being escorted by the gunman. The gunman entered the business and took Jasleen who was carrying the infant.

The authorities said that a farmer found two of the victims’ cell phones on a road on Monday.