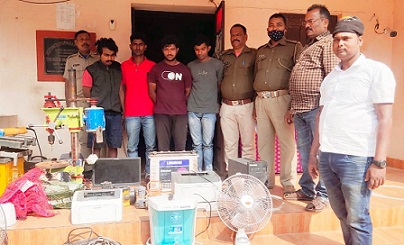 Bhadrak: Police have arrested four persons on the charges of stealing goods worth Rs five lakhs from a hospital and Panchayat office at Hasanagar under Dhamnagar block in the district today.

Acting on a tip-off, S.I Mahaprashad Nayak along with ASI-Dhrutrastra Malik and other officers reached Bhubaneswar and arrested four accused in this connection. The cops have also seized stolen goods from their possession.

According to available information, Ahmed has set up a garage in Bhubaneswar. He often comes to Dhusuri and joined them in the theft. Along with these, they conducted thefts at various places and later distributed the stolen goods between them in Bhubaneswar.

Ganja worth over Rs 1 Lakh seized from shop in Bhadrak