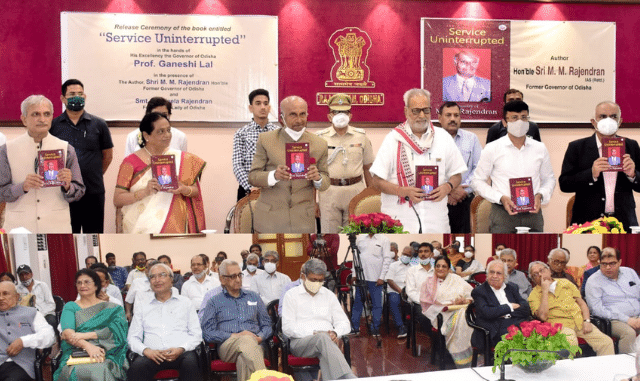 Bhubaneswar: Being aware of one’s duty and responsibility not only makes him successful but he gets respect and commendation everywhere. Former Governor of Odisha Shri M.M. Rajendran is such an example who has created a distinct identity by serving uninterruptedly in many highest posts and glorified it with his strong devotion and innovation. He is an ideal and inspiration for the younger generation, said Hon’ble Governor Professor Ganeshi Lal.

Congratulating the former Governor for having authored such a valuable book on his long experience and knowledge Governor said the reforms initiated by former Governor in university functioning were well appreciated and are still followed making Odisha a frontline State. He also mentioned about the importance of women empowerment, child development and nutrition on which former Governor worked in the highest level and said children are always important for him and all steps should be taken to unfold the unlimited possibilities in them. Governor expressed hope that the book will find appreciation from all levels.

Addressing on the occasion author and former Governor Shri M.M. Rajendran narrated several instances and events during his long career as an Indian Administrative Officer serving in different capacities and posts. Stating secret of success is about finding out a way to overcome difficulties and challenges he said he practiced hard work and highest standard of integrity all throughout his life. He further said his interest and desire to do something for people drove him to take many bold steps benefitting people. He described his period as Governor of Odisha as very rewarding and he always worked abiding to Constitution of India. He advised younger generation to put their best in whatever they do and it would give them satisfaction. Former Governor fondly recalled the support and encouragement he received former President Dr. APJ Abdul Kalam on several occasions. He concluded that he wrote the book for posterity.