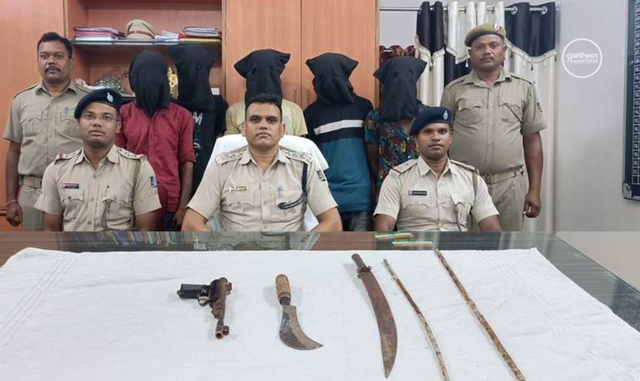 Acting on a tip-off about the assembly of criminals near Matigate area late last night, police swung into action and managed to apprehend five dacoits who were planning to loot truck drivers.

The police said that a country-made pistol, one sword, one machette, and two iron rods were seized from them. The arrested persons have been identified as Satish Sa, Suraj Singh & Kishore Buda of Barupada, Gyan Ranjan Razak of Madhu Sudan Colony and Anand Ray alias Tiger of Swadhin Colony.

For the past few months, there has been an increase in robberies from truck drivers resting at night on Matigate road along Rajgangpur OCL truck parking.

Last night, under the supervision of Rajgangpur IIC Bibatsa Kumar Pradhan, SI Khagapati Biswal and other police personnel rushed to the spot where the dacoity gang were planning to carry out a robbery at Matigate late last night and arrest five of them.