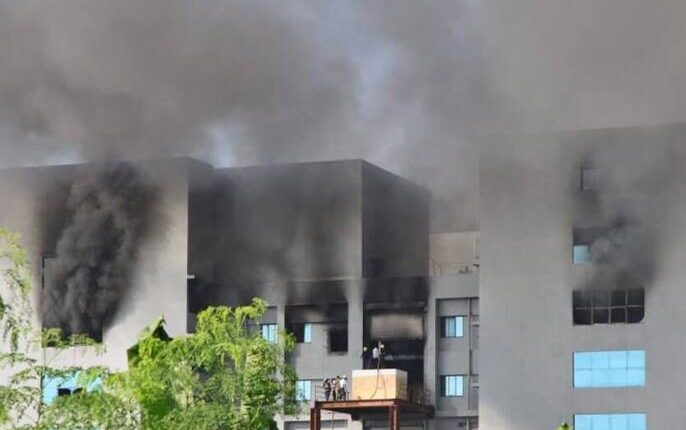 Pune: Five persons were killed after fire broke out in Serum Institute of India (SII) building on Thursday afternoon.

Poonawalla in his tweet said there has been some loss of life at the fire incident and added that they are deeply saddened. They offer their deepest condolences to the family members of the deceased, he said in his tweet.

The Serum Institute of India is the manufacturer of the Oxford-AstraZeneca coronavirus vaccine – Covishield.

Reports said the blaze at the SII plant in Pune has been brought under control. Maharashtra Chief Minister Uddhav Thackeray has assured the people that the coronavirus vaccine production has not been hit due to the fire tragedy.

Thackeray said an electric short circuit might have been responsible for the fire tragedy. Six persons were rescued from the site.

Pune Mayor Murlidhar Mohol said that the five people, who died, were workers at the under-construction building.

Prashant Ranpise, the chief fire officer, Pune Municipal Corporation said the fire was under control. The cause of the fire is still unknown, he added.  The fire broke out at a building inside Terminal Gate 1 of the institute.

A number of fire tenders were rushed to the spot to douse the flames. A team of National Disaster Response Force (NDRF) was also dispatched to the spot.

The SII’s Manjari facility produces the Covishield vaccine. However, the building where the blaze started is part of an under-construction site of the SII. It is situated nearly one km from the Covishield manufacturing unit.