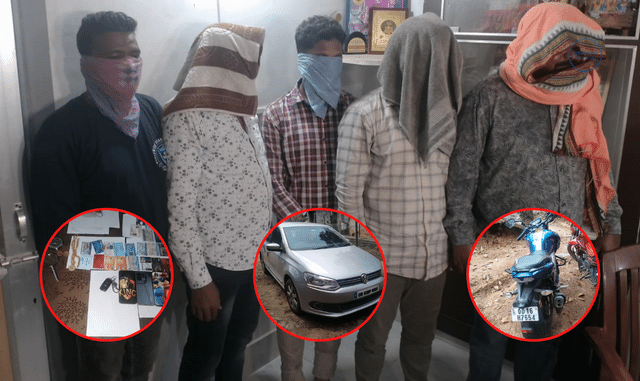 Jharsuguda: A Special Police team has apprehended five persons involved in looting cash and valuables from a contractor after luring to sell him “Hanuman Coin” in Jharsuguda district.

According to police, one accused namely Ajit of Sambalpur had befriended a civil contractor of Kendrapada, Rabindra Dash, and motivated him to purchase a “Hanuman Coin” at a cost of Rs 1 lakh. While they were on their way to buy the “Hanuman Coin”, Ajit robbed the cash of Rs 1 lakh and a mobile phone from Dash on Laikera road.

On the basis of a complaint, a case (493/27.08.22) under Sections 420 & 392 of the IPC was registered into the incident and a special police team, formed under the direction of Jharsuguda SP, Monday evening caught five accused persons at Sarbahal while they were returning from Sambalpur, the police said.

Police have seized Rs 90,000 cash, six mobile phones, one motorcycle, one car, and two duplicate “Hanuman Coins” from the accused persons, hailing from to Sundargarh and Subalaya areas. Besides, verification is underway to ascertain the criminal antecedents of the accused persons and their involvement in similar cases.

Jharsuguda SDPO Nirmal Mahapatra has advised the people not to fall into the trap and abstain from such cheater gangs.