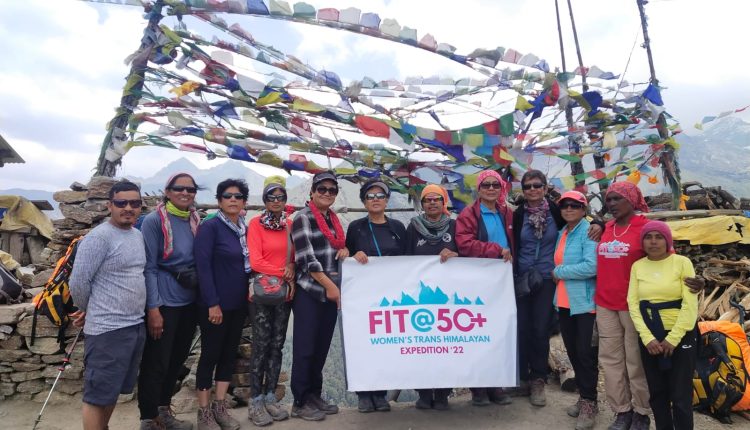 11-member team covers 35 passes, 4,841 km in 140 days I A unique Expedition with participants aged 50 years and above from across India

New Delhi: Fit@50 + Women’s Trans Himalayan expedition, organised by Tata Steel Adventure Foundation (TSAF) in collaboration with the Ministry of Youth Affairs and Sports under the Fit India banner, and the Indian Army,has successfully completed its 140 days of the expedition. Union Minister of Youth Affairs and Sports, Anurag Singh Thakur, felicitated the Expedition team at the iconic Major Dhyanchand Stadium in the national capital on August 2, 2022.

Mentioning the elephantine expedition undertaken by the team, Anurag Singh Thakur, Union Minister for Information & Broadcasting and Youth Affairs & Sports, Government of India, said: “This is a big slogan in itself, being fit at 50. The expedition has been inspirational for not just the 50-year-olds in the country but also for everyone in India. What you all have done is remarkable by all means. This is the true power of nari-shakti.”

Reiterating the Prime Minister of India’s vision regarding Fit India, Anurag Singh Thakurmentioned: “Shri Narendra Modi ji envisioned the mantra of ‘Fitness ki dose, adha ghanta Roz’. Now, we have done everything possible to live up to that vision. The challenges were steep, and the Indian Army too lent their helping hands in every step. Bachendri Pal’s leadership was exceptional.”

The 11-member team comprising women in their 50s and 60s culminated their journey at the Kargil War Memorial on July 24 to commemorate Kargil Vijay Diwas. At the memorial, the team paid homage to the war heroes who achieved martyrdom in the 1999 Kargil War. The expedition celebrates India’s 75th Independence Day and is dedicated to the Central Government’s ‘Azadi ka Amrit Mahotsav’ initiative.

This Fit@50+ team was led by the legendary Mountaineer, Padma Shree, Padma Bhushan Ms. Bachendri Pal, the first Indian woman to summit Everest in 1984. The team consisted of women from various backgrounds such as retired corporate professionals, retired army persons, housewives, retired locomotive drivers, grandmothers, and working women too. While the youngest member is 54 years old, the eldest member is aged 68 years.

According to the pioneering leader Ms. Bachendri Pal, the aim of this expedition was to highlight the need to remain fit and show that age is no barrier to living a healthy lifestyle and that 50 or 60 years of age doesn’t mean dreams should be over.

On the occasion, Ms. Bachendri Pal, Leader of the Expedition and Mentor, TSAF, said: “It was a commitment. I was retiring from TSAF in 2019, the year Fit India was launched. I was inspired and motivated by the fit India movement started by Prime Minister Narendra Modi. It was at this moment that the idea of activity for women in their 50s and 60s who are generally considered weak and unfit came to my mind. So, I dreamt about it and contacted 11 members of this expedition and then we approached the government and Army Adventure Wing and they supported this Expedition.”

Chanakya Chaudhary, Chairman, Tata Steel Adventure Foundation and Vice President, Corporate Services, Tata Steel, said: “First of all I would like to congratulate the team on successfully completing the expedition despite numerous challenges. I am in awe of their courage, strength, determination, and indomitable spirit. The objective of this expedition was to raise awareness about health & fitness among senior citizens and to set an example, especially for women that it is possible to stay fit & healthy and to dream big irrespective of the age. I hope the expedition will inspire and motivate women of all age groups to include fitness activities in their daily lives to stay healthy. As for TSAF, we will continue to promote adventure sports in the country and inspire generations, through our unique propositioning and sustained endeavours.”

The expedition started from PangsauPass(Indo-Myanmar border)and concluded at Dras sector, Kargil in Ladakh, covering a distance of over 4,841 km and traversing 35 high mountain passes in 140 days from East to West of the Himalayas in India and Nepal. The passes crossed include the toughest LamkhagaPass at 17,700 ft height; the most challenging and the highest of the passes, Parang La pass at an astounding 18,300 ft; the Bhabha Pass at 16,000ft, and the Thorang La Pass at 17,800 ft. Over 50 guest trekkers including 3-4 from outside India joined the expedition for a short duration of 7-10 days at different locations. Among them included a 75-year-old woman who successfully crossed the LamkhagaPass.

The team had to overcome extreme weather conditions, treacherous climbs, and constrained resources every step of the way. Some of the routes in Eastern and Western Nepal were extremely remote and many times the team trekked for days on end between an altitude of 10,000-14,000ft. While the longest day trekked was 13.5 hours at an altitude above 10,000ft, the longest distance covered in a day at a high altitude of 12000 ft was 29 kms. The team also shared some memorable and unique experiences including staying at a graveyard, a Chicken farm, abandoned buildings, and old school verandas.

However, as the expedition progressed, each team member slowly started pushing their limits and began adjusting and adapting to the surroundings. Leader, Ms. Bachendri Pal’s inspiring pep talks, vigilant eyes, and constant reminder of the final goal kept them charged.

Talking about the 5-month-long journey, Ms. Pal added: “Initially the team had their own share of physical, psychological, and mental limitations and apprehensions. But as the journey progressed the focus and goal of the expedition took the front seat. I strongly believe that the biggest risk in life is not taking risks. I am very happy that despite many uncertain conditions, challenging routes, and inclement weather conditions, the team managed to stretch the limits, and joined hands with me to realise and fulfil not only my dream but also their own potential”.

The FIT@50+ Women’s Trans Himalayan Expedition this year was supported by Tata Sports Club as the fitness partner, TraQ by Titan as the time partner, Vistara as the airline partner, and Tata AIG as the insurance partner. Adventure Worx is the Gear partner, Abaran Jewellers, Suprajit Foundation Atul Foundation, Patanjali &Adukale the ready-to-eat food partner.

The trek commenced on March 12, 2022, from Pangsu Pass at the Indo-Myanmar border. The team then passed through Arunachal Pradesh, Assam, Sikkim, and West Bengal covering some important locations such as Hasimara, the silk route- Zuluk, Kupup, Nathang, and reached Nathulla pass. The team started again from Mani Bhangeyan to Tumling, Kalipokhri,and reached Sandakphuat 11, 998 ft.

From here the expedition moved to Nepal where the team travelled for 55 days. Starting from Eastern Nepal they covered Phalut, Chayangthapu, Mewakha, and Taplejung. The lesser explored Eastern part was an interesting and challenging one. The team trekked in areas such as Singri, Banjankharka, Khandbari, Jaubari and crossed Kulupodkho pass at 11,200 ft and moved to Junbesi in the Solukhumbu area.

Later the team embarked upon the Annapurna circuit in Central Nepal from Besisahar and moved to Manag district.The team after covering Chame, Upper Pisang, Manang, and Yak Kharka moved to ThorangPhedi. On May 16, 2022, from ThorangPhedithey reached Thorang la pass at 17, 769 ft successfully despite an inclement weather condition. They then descended to Muktinath in rain and snow.

Two Persons Critical Due To Acid Attack In Bhadrak