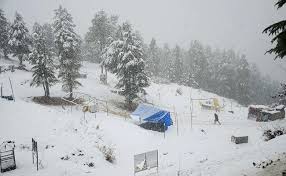 Shimla: Shimla has witnessed its first snowfall of the season bringing cheers to the tourists who have come here to celebrate Christmas and New Year.

Met office said the snowfall began at 9:15 pm yesterday at Mall Road, Jakhu, Chhota Shimla and other popular regions of the city.

Shimla Police issued an advisory saying all roads in upper Shimla are blocked due to snowfall and roads in Shimla city are slippery.

The Met office further said the minimum temperature in Shimla was recorded at 4.7 degree Celsius and it is likely to dip further in the coming days.

More rain and snowfall are predicted in various parts of Himachal Pradesh, including Shimla, on Monday.  The weather office said  Lahaul Spiti remains the coldest place in Himachal Pradesh with minus 11.6 degree Celsius temperature while Keylong, Kalpa and Manali continued to shiver at sub-zero temperatures.

The minimum temperatures in Mandi, Bhuntar, Sundernagar and Solan settled at minus 2, minus 1.6, minus 1.2 and minus 0.5 degrees Celsius, respectively. Kangra valley recorded the highest temperature in the state at 19.4 degrees Celsius.