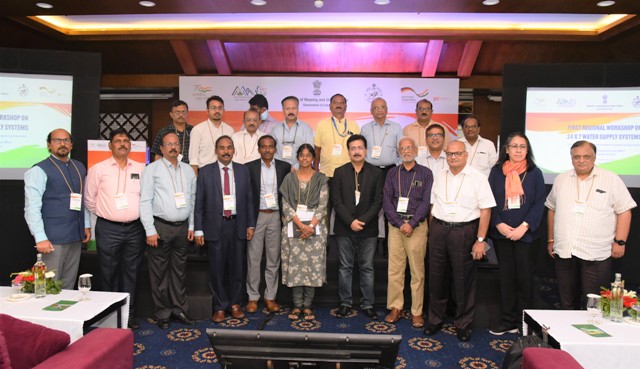 Bhubaneswar: The Ministry of Housing & Urban Affairs (MoHUA), Government of India has organized the first Regional Workshop on 24×7 Water Supply Systems in Puri in the state for two days on 29th& 30th September. Senior officials from the Central Ministry and Housing & Urban Development Departments of 9 states along with the Central Public Health & Environmental Engineering Organization (CPHEEO) and members of the National Task Force on 24×7 Water Supply Systems, MoHUAparticipated in the workshop.

Addressing the gathering Smt. D. Thara, IAS, Additional Secretary & Mission Director, AMRUT, MoHUA, Govt. of India mentioned that “Puri is the living laboratory of 24×7 water supply system where Drink From Tapquality water is provided to its all 33,300 households covering more than 2.5 lakh population along with 20 million plus pilgrims annually and the 1st ever city in the entire country till date to do so. We all should learn from this unprecedented process to replicate in other cities”.

She also said that “Hon’ble Prime Minister launched AMRUT 2.0 on 15th October 2021 with a vision to make all cities water secure and provide universal coverage of water supply services in all the urban areas of the country. One of the outcomes of AMRUT 2.0 is to provide 24×7 water supply with a drink from tap facility in at least one ward or one DMA in all 500 AMRUT cities”.

Mr G. MathiVathanan, IAS, Principal Secretary, Housing & Urban Development Department, Govt. of Odisha opined that “24×7 is not rocket science and it is the need of the hour to improve the service delivery and steer the economy by improving the livelihoods of the urban population. Odisha became a pioneer with its transformative ‘Drink from Tap Mission’, as the Department was determined to provide quality water supply to the doorstep of its entire urban population. Hon’ble Chief Minister was also very much supportive towards the cause and the successful implementation of the project”.

‘Drink from Tap Mission’ called ‘Sujal’ was first launched on 13th October 2020 by hon’ble Chief Minister Naveen Patnaik to provide quality drinking water, fit for direct consumption from the tap to all households in urban areas. The Mission is a flagship initiative by the Water Corporation of Odisha (WATCO) under the state’s Housing & Urban Development Department. Later, on 26th July 2021, the hon’ble Chief Minister dedicated the Mission to the entire Puri city as the 1st Indian city to get round-the-clock pure piped water supply to its habitants.

The two-day workshop was aimed at a meaningful interaction between the members of the National Task Force and State Task Forces from the participating states like Andaman & Nicobar Islands, Andhra Pradesh, Assam, Karnataka, Kerala, Odisha, Sikkim, Tamil Nadu, Telangana and to disseminate knowledge and extend handholding support to states and cities for converting from intermittent water supply to 24×7 water supply systems. This is coupled with field visits in Puri to see and practically understand the operation & maintenance process of a 24×7 water supply system, smart water management and the importance of community partnership in the shape of ‘Jalsathi’ for sustainable urban water supply management.