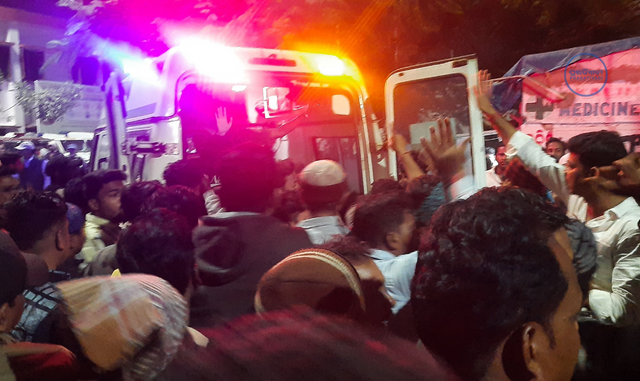 ‘Fireworks Competition’ During Immersion Procession Leaves Over 30 Injured In Kendrapara

Kendrapara: More than 30 persons were injured in a series of explosions that took place while a fireworks competition was underway during an immersion procession at Balia bazaar within Sadar police station in Kendrapara on Wednesday night.

According to reports, all have been admitted to Kendrapara District Headquarters Hospital while four persons with critical burn injuries have been referred to SCB Medical College and Hospital in Cuttack.

Sources said, during the immersion of Lord Kartikeswar’s idol at  Balia bazaar late this evening competition of fireworks was underway. In the meanwhile, a stock of firecrackers burst after coming in contact with fire resulting in a series of explosions.

The people going along with the procession, shopkeepers nearby, and people enjoying the fireworks suffered burn injuries in the explosion and were rushed to the nearby hospital by locals and police personnel.

(This is a developing story. More details are awaited.)