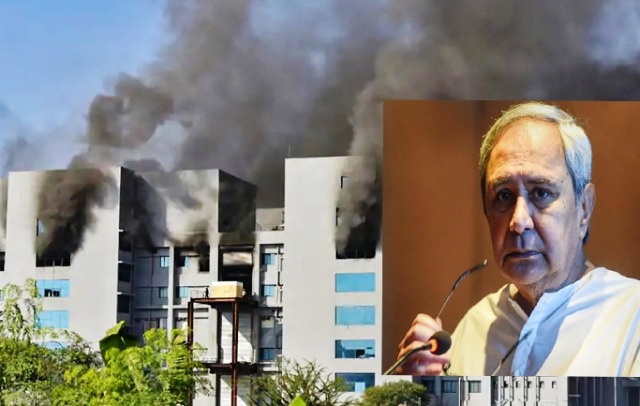 Bhubaneswar: Odisha Chief Minister Naveen Patnaik expressed deep grief over the loss of lives in the major fire at Serum Institute of India campus in Pune on Thursday.

Deeply saddened by the loss of lives in the tragic fire accident at #SerumInstituteOfIndia campus. My thoughts and prayers are with the bereaved families in the hour of grief and pray for the speedy recovery of those who are hospitalised.

A major fire that broke out at the Pune-based Serum Institute of India’s building this afternoon led to the death of five people. Pune Mayor Murlidhar Mohol said four people were evacuated from the building but when fire came under control, five bodies were found by the jawans. The five people who died were suspected to be the workers at the under-construction building.

The fire, which broke out at 2.45 pm on the fourth and fifth floors of the SEZ 3 building in the Serum Institute premises, was brought under control in two hours. A fire brigade official said cause of the fire is yet to be ascertained. A National Disaster Response Force (NDRF) team also rushed to the spot. Fifteen fire tenders were pressed into action and the fire was brought under control around 4.30 pm. Furniture, wiring and cabins were gutted but no major machinery or instruments were stored in the floors where the fire broke out.

Meanwhile, Serum Institute of India, SII Chief Adar Poonawalla has expressed deep condolences over the loss of lives. He also announced Rs 25 lakh ex-gratia each to the families of the victims.

SII, the world’s largest vaccine manufacturer, is involved in manufacturing COVID-19 vaccine ‘Covishield’ – developed by Oxford University and AstraZeneca – which has been given emergency use authorisation in India recently and is being used for inoculation in the country’s mega vaccination drive. The building where the fire broke out is part of the under-construction site of the Serum facility and is one km away from the ‘Covishield’ manufacturing unit.

“Today is an extremely sorrowful day for all of us at Serum Institute of India. Regrettably, there were losses of lives in the fire that broke out in our under installation facility… pic.twitter.com/QJLofvwGRV

…situated at the Special Economic Zone at Manjri.

We are deeply saddened and offer our condolences to the families of the departed. In this regard, we will be offering a compensation of INR 25 lakhs to each of the families, in addition to the mandated amount as per the norms.